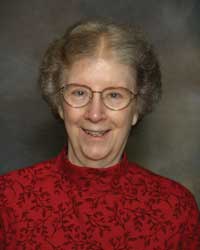 Barbara, daughter of the late Peter and Wilhelmina (Haberzeth) Schaefer, was born November 5, 1928 in Waterloo, IA. She was baptized and confirmed at St. Mary’s, Waterloo. She entered the Sisters of St. Francis in Dubuque from St. Mary’s on August 25, 1947. She was received with the name Sister Mary Roland on August 12, 1948 and made her final profession of vows on August 10, 1953.

Sister received her master’s degree in reading education at University of Cardinal Stritch, Milwaukee, WI. She ministered as an educator in Iowa at Remsen, Ashton, Roseville, Manchester, Waterloo, St. Joseph, Bode, St. Michael’s and Heelan, Sioux City, and St. Mary’s and Sacred Heart, Dubuque. She was also missioned in Illinois at Melrose Park.

Sister is survived by her sister Gloria Ann Barfield; nieces and nephews, and her Franciscan sisters.

Sister was preceded in death by her parents; her sister, Mary (John) Kidwell; her brothers, Melvin (Joan) and Charles (Diana); and her brother-in-law, Kenneth Barfield.