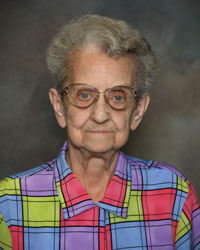 Frances, born in Waterloo on July 3, 1921, was the third youngest of 12 children. She described her home as a very happy and kind place where religion played a prominent part in their daily lives.

Frances attended St. Mary’s School from kindergarten through 12th grade.  She greatly enjoyed her high school Franciscan teachers, and felt that she was given many educational opportunities, from parts in their operettas to bringing home trophies for the girls’ basketball team, called “The Green Peppers.”

In her autobiography she wrote, “Know what? A lifetime isn’t sufficient time to thank the Lord properly for all the blessings and advantages offered me in life…I’m grateful!”

Sister Jude retired to Mount St. Francis in 1971, and moved to Clare House in 2014. During the next years she spent many days with one of her sisters until her death.

She is survived by her sister Leona Witt; nieces and nephews and her Franciscan Sisters with whom she spent 76 years.