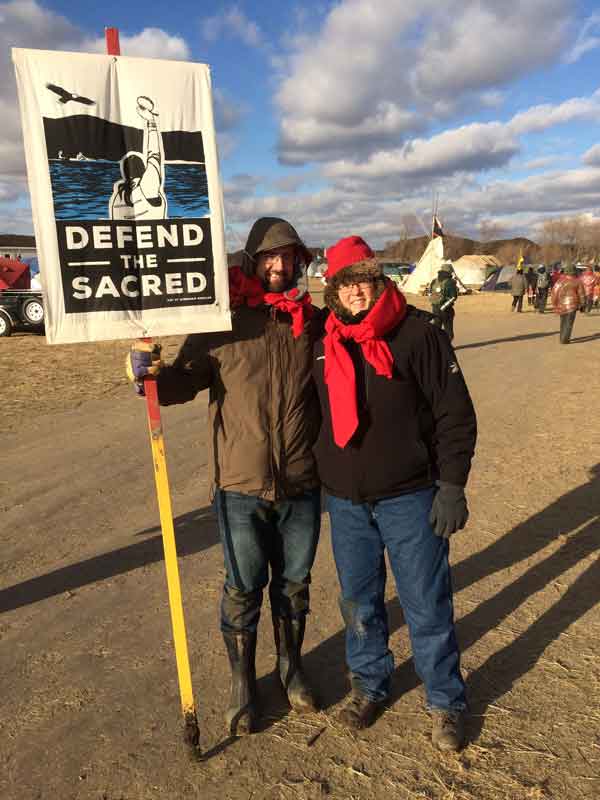 Sister Karla Kloft, OSF, traveled to North Dakota protest with the Standing Rock Sioux, who oppose the Dakota Access pipeline’s construction, near the Sioux reservation on November 17 and 18.

“What is going on there is absolutely horrible and those people have a right to their water. It’s another instance where big money tries to roll over the little people,” said Sister Karla.

While in North Dakota, Sister Karla took part in two prayer services with the Sioux.  “For me it was a spiritual experience.  They start and end their ceremonies acknowledging the four directions.  It was a wonderful community of caring individuals,” she said.

While there, she met people from all over the country and even as far as Scotland who had come to protest the pipeline.  “It’s a real community.  They care about each other and they have a common goal.  It was a beautiful atmosphere.  It was really profound.”

Since returning from North Dakota, Sister Karla continues to think about all of those protesting.  “I’ve come home with a really heavy heart because of the oppression of these people – yet I have hope in sense because there is such a spirit and spirituality of the people.”

On Monday, November 14, several Dubuque Franciscans joined a protest at U.S. Bank in downtown Dubuque to show their opposition to the bank’s financial support of the Dakota Access pipeline. Together the protesters chanted, “We can’t drink oil, stop this pipeline!” and also sang “Water is Life.”