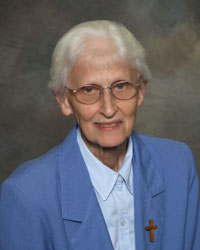 The Sisters of St. Francis of the Holy Family commend to your charity the soul of their beloved Sister Lois Kobliska, OSF,  who was born, December 8, 1936, and departed this life December 22, 2015 in the 59th year of her religious life.

Sister Lois was born to James and Josephine Brown Kobliska in Howard County, Iowa and baptized at St. Patrick’s Church of St.Cecilia, in Alta Vista, Iowa.

Among the children born to James and Josephine were Carmelita, Vera, Rita, and Leonard.

On August 25, 1956, she entered Mount St. Francis, and the following year at her reception into the community on August 12, 1957, took the name, Sister Mary Clarella.

During the summertime, Sister Lois volunteered in the Sisters of St. Francis’ Common Venture program. Among the places she worked on were the reservation at Pine Ridge, South Dakota, and with the remedial students at Nashville, Tennessee, where she spent the summers of 1973-1977.

Some of the Sisters who have lived with Sister remember her as a very intelligent person who loved to read. Her family would give her books as gifts for Christmas and within a few days she would have had them read. She had a quiet sense of humor and a grin that crinkled up her nose. Another pastime Lois had was playing the piano and working crossword puzzles. If she needed help she would ask for assistance, making it a game for all the sisters. She often would visit the sick and the elderly in the parishes because in her words, “They just sit alone and they need visitors.” Sister often read scriptures as well. One of her favorite Scripture readings was the story in St. Luke: 7:11-17, the widow whose son died and Jesus brought him back to life and gave him back to his mother. To her, Jesus was sensitive to widows and those who have no one to care for them.

After teaching, she worked in parish ministry at St. Pius X parish in Rochester, Minnesota, for almost 25 years. During that time, she also visited and took care of her sister, Vera.

Sister Lois retired to Dubuque in 2015, and for a very short time lived at Francis House and Clare House.

Sister was preceded in death by her parents, her sisters Carmelita (Victor) Kovarik, Vera (Thomas) Behan, and Rita Kobliska.

Sister is survived by her brother Leonard (Julia) and nephews and her Franciscan sisters with whom she shared 59 years of her life.