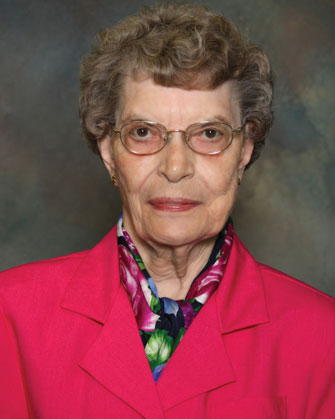 Born on the family’s farm near Ossian, Iowa, Marie was the youngest of eight sons and six daughters born to Herman and Agnes (Hemesath) Bohr. (A brother, Hugo, died before she was born.) As Marie was growing up, many of her siblings married or left home to pursue work possibilities, but she enjoyed the opportunity to visit them in their new homes. Her brothers, Jerome and Richard, were away in seminary while Marie was in school.

The depression years were difficult for the family, but these were nothing compared to the sorrow of the deaths of Marie’s brother, Tony, in 1941 and Father Jerome in 1944.

After graduating from high school, Marie worked as a nurse’s aide in Waverly, IA and later in New Hampton, IA where she rented an apartment, learned to drive, and bought a car. She enjoyed her independence, but the call to religious life was stronger. On August 25, 1950 she entered Mount St. Francis to the joy of her Franciscan teachers and her Bohr and Hemesath Sister relatives. She was received the next year and given the name Sr. Mary Antoine. Many years later when the community members had the choice to return to their baptismal name, Marie chose the latter.

Sister Marie taught students in the elementary grades for 20 years: in Iowa at Granville, New Vienna, Earlville, St. Mary and Holy Trinity in Dubuque and at Corpus Christi, Chicago, and North Riverside, both in Illinois.

In 1976 she fulfilled a long-held dream of studying nursing and receiving her LPN license. She ministered as a nurse at St. Mary Hospital, Emporia, Kansas, and in Dubuque at Xavier Hospital and at Stonehill Care Center. She wrote of the experience, “It has been and continues to be a rewarding but challenging experience – sharing life with the elderly and becoming in some small way a part of the wisdom that is theirs!”

Sister is survived by nieces and nephews, and her Franciscan sisters with whom she shared over 67 years of her life.