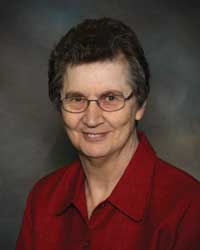 On November 3, 1937, Mary Ann Helle was born to George and Sedella (Kramer) Helle on a farm outside Dyersville, IA. Her mother died when she was young, and her father married Joan Jaeger. Mary Ann, the 3rd oldest, was blessed with many sisters and brothers: Pearl, George, Norma, LeRoy, Paul, Frank, Marlene, Janet, Ruth, Bob, LuAnn, Joanie, Doris, Kathleen, and Henry.

Mary Ann attended a country school for the first grade and part of second grade, and then Xavier Grade and High School in Dyersville. After completing her education, she worked in a department store for a year before she entered the community on August 25, 1956. On August 12, 1957 she was received into the Sisters of St. Francis and given the name Sister Mary Vincent de Paul.

Sister Mary Ann began her teaching/administration ministry in Granville, IA and then moved on to Remsen, IA; Hazel Crest, IL; Melrose Park, IL; Sioux City, IA; concluding in Humboldt, IA. As a teacher or administrator, it was her goal to call teachers and students to “discipleship.” She is quoted as saying: “Truly, the staff and the student body are called to discipleship. We have the opportunity and challenge to grow and follow Jesus as He said in Mt. 28:19-20, ‘Go and make disciples of all nations… Teach them to carry out everything I have commanded you. And know that I am always with you, until the end of the world.’”

Some of the many activities she enjoyed were praying, reading, creative arts, crafts, and sewing. One of the most significant events in her life was a trip to Assisi, Italy given to her as a gift from parishioners of Sacred Heart in Sioux City. In 2005, Mary Ann moved to Mount St. Francis to begin a new undertaking as the Coordinator of the Sewing Room. She retired in 2010 and moved to Clare House in 2015.

Sister was preceded in death by her parents; a sister Kathleen Helle; a brother Henry Helle; brothers-in-law Gerald Kelchen and John Schwendinger.