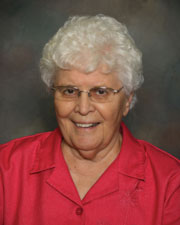 Following Archdiocesan directives, a private Committal Service was held on Thursday, March 19.  A Memorial Mass will be scheduled for a later date.

On Easter Sunday, 1927, George and Lioba (Kraut) Wingert welcomed their fourth daughter in Raymond, IA. Since the pastor was leaving for two weeks, George took her that same day to be baptized. As he was leaving, his wife asked what he was going to call her. He answered, “After her mother, of course.” And so the child was called Lioba Remigia after her mother and a cousin, Sister Remigia. Three boys were born later, bringing the family to nine.

George operated the only grocery store in Raymond, and Lioba sometimes helped stock shelves. There was no Catholic school in town, so sacramental preparation was left to the family. Lioba’s older sister, Joan, prepared her for her first Confession.

Lioba attended a one-room schoolhouse in Raymond for her elementary education. They drove ten miles to attend a Catholic high school because her mother believed the Franciscans were the best teachers. After graduation from St. Mary’s, Lioba attended Teachers’ College in Cedar Falls for 12 weeks, earning a temporary teaching certificate. For a year, she was an assistant teacher in the Raymond school, taking her turn starting the fire in the winter mornings.

During the summer Lioba went to Washington, D.C., with her sister, Mary, and typed for three lawyers in the Office of Price Administration. In the fall she returned to Raymond. Lioba knew she was being called to religious life, but determined to go for a month just to prove she didn’t belong there. Despite being very homesick, Lioba persevered until the realization came to her that she really wanted to be a Sister.

At her reception on August 12, 1946, Lioba was given the name, Sister Mary Mona. After final profession in 1948, she was missioned at Holy Trinity in Dubuque, teaching kindergarten in the mornings and PE for children in grades 1-6 in the afternoons. On January 28, 1955, Sister Mona’s mother died at age 56. This was the first death in her immediate family, and came as a great shock to her.

Sister Mona also taught kindergarten and fourth through eighth grades at St. Mary of the Woods in Chicago, and was principal and superior for the Sisters. Following this, she was elected to congregational leadership as Regional Coordinator when the community first went to that governance model. Sister Mona then returned to education, serving four years as principal at St. Edward’s in Waterloo before she was hired as an Associate in the Archdiocese of Dubuque Education Office.

In 1986, Sister became Assistant Superintendent of Education in the Diocese of Charlotte, North Carolina. Her sixteen years in Charlotte gave her a chance to be with her brother John, his wife, and his children and the grandchildren.