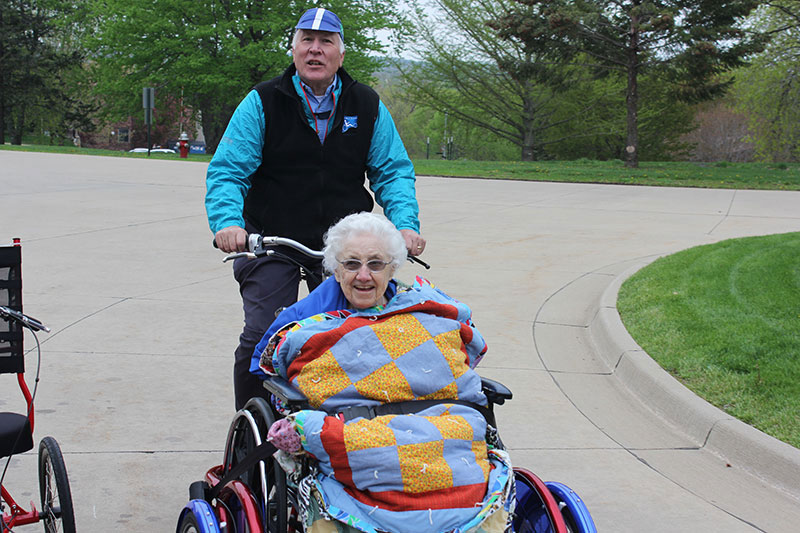 “I don’t think I’m going to be able to do it, it’s been so long,” said Sister Verna Gaul, OSF, as she stepped outside with her walker to the bicycling event at Mount St. Francis on Friday, April 29. Waiting to show Sister Verna otherwise were John and Celia Brunow of All Ability Cycles from Jefferson, Iowa.

All Ability Cycles sells and services bicycles and tricycles for individuals with special needs. “We believe everyone can ride. We call it inclusive cycle,” reads the tagline on All Ability Cycles’ Twitter page. Parked in the traffic circle at Mount St. Francis Center, the motherhouse of the Dubuque Franciscans, John and Celia Brunow unloaded the bikes as a crowd of sisters gathered to look on. In his van was a single person recumbent tricycle; a platform tricycle, which could transport a wheelchair; an Opair tricycle, which can transport a wheelchair user; and a side-by-side tandem tricycle, which allows for two passengers seated next to one another.

Strapping on a blue helmet printed with flowers, Sister Madonna Lang, OSF, pedaled off from the Virgin Mary statue at the front of the building to cruise around the parking lots of Mount St. Francis Center, which the Maintenance Department had closed off to traffic.

“I enjoyed it,” said Sister Madonna of her ride, who hadn’t been on a bike in nearly 40 years.

“I could’ve ridden a longer time on it,” she said smiling.

John and Celia Brunow originally owned a bike shop in Vienna, Virginia. Due to the proximity to the Walter Reed National Military Medical Center and the National Naval Medical Center, both located in Bethesda, Maryland, near Washington, D.C., their shop received requests for adaptive bikes. After a move to Iowa, they opened All Ability Cycle in 2011.

“When we wanted to come back to Iowa and we looked at what other bike stores in the state were doing and no one was targeting the adaptive market,” said John Brunow.

While in Dubuque April 29-30 for a fundraiser, All Ability Cycles stopped by Sunset Park Place Retirement Community to exhibit their bikes and let the residents test them. Brunow asked the staff at Sunset Park Place if they could suggest another retirement home where he could offer the bikes. The staff recommended Mount St. Francis Center, home to 147 of the 240 Dubuque Franciscan Sisters, of which 71 live in skilled care.

“It was my first visit to a convent,” said John Brunow.

One after another, the sisters took turns on All Ability Cycles’ bikes. The sounds of laughter and bicycle bells intermingled outside of the Franciscan motherhouse. Although the weather was cool, most sisters stayed after their ride to watch and cheer on the others, waving them off as they pedaled away.

Val Lucas, activities director for the Dubuque Franciscan Sisters, wasn’t sure what kind of turnout there would be for the event due to the weather but was pleasantly surprised at the 31 sisters who participated.

“I think they looked out the windows and saw the fun the others were having,” said Lucas, who helped coordinate the event. “To see those smiles—it was so joy-filled.”

Sister Inez Turnmeyer, OSF, also noted the happiness she saw in her fellow sisters while on the bikes.

“There is no age limit that anyone can enjoy something like that,” she said. “It brought back a lot of memories and good feelings for everyone.”

Sister Susan Seitz, OSF, experienced some of those memories while on the bike.

“I remember how we used to have a car available to us growing up, but we always chose the bicycle instead,” she said. “It was such a good experience riding a bike again. I surprised myself that I could do as well as I did when I was younger, and I didn’t even mind the cold!”

To help combat the chilly temperatures, Mount St. Francis staff tucked blankets around Sister Antonita Soppe, OSF, before she set off with Brunow around the convent.

At 102 years of age, she was not only his oldest passenger of the day, but of all time. “How was your ride, Sister?” asked the staff when she returned. Her response captured the feelings of everyone at Mount St. Francis that afternoon.

“It was perfect,” she replied.