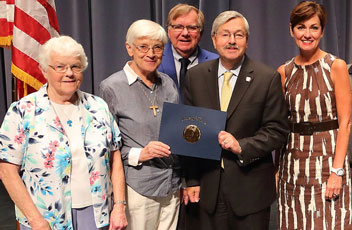 Sisters Carol, Mary Clare, and Marian were acknowledged for over five years of service to the Jail and Prison Ministry program of Catholic Charities in Dubuque.

“I am pleased to honor those who have given the precious gift of their time to meet essential needs across Iowa,” stated Governor Terry E. Branstad. “The commitment of these volunteers—and all volunteers—helps Iowa consistently remain in the top 10 states in the nation for its volunteerism rate.”

“Volunteering not only has a positive impact on the individuals receiving the service, but serving others transforms the volunteer themselves,” said Lt. Governor Kim Reynolds. “The dedication of the people selected for these awards often encourages others to become involved in service, and I am delighted to recognize them for their amazing contributions.”