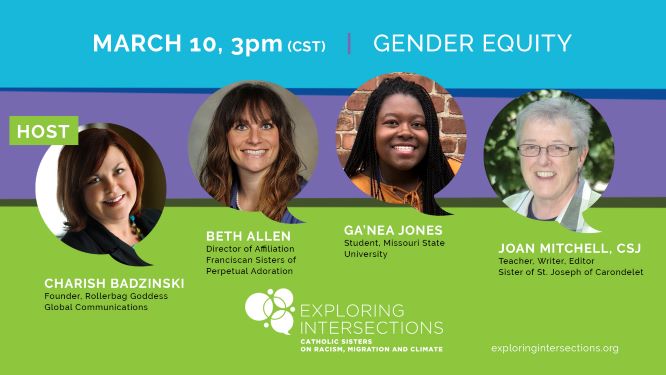 The Dubuque Franciscan Sisters join Catholic Sisters from 24 congregations in four states this March to launch a yearlong, live-streamed conversation series on the leading social justice issues of our time.

Titled “Exploring Intersections: Catholic Sisters on Racism, Migration and Climate,” each month this series will focus on a different social issue and explore how it intersects with racism, migration and climate in a thought-provoking and engaging conversation.

The conversations will be streamed live on YouTube at 3 p.m. the second Wednesday of each month, beginning March 10.

During the first session, panelists will explore equal access to resources and opportunities regardless of gender, and how gender equality is interconnected with issues of racism, migration, and climate change.

Three panelists from different walks of life, including Catholic Sisters, will bring unique perspectives to each session.

The launch is timed to coincide with Catholic Sisters Week (March 8-14), an annual celebration of women religious created to bring greater focus on their lives and work.

The live-streamed sessions will be interactive, with opportunities for questions and comments following the 45-minute panel conversation for those who register on Zoom.

Moderating the series will be Charish Badzinski, a writer, public relations consultant, and founder of Rollerbag Goddess Global Communications whose passions include social justice, human rights and preservation of the planet.

During the first session March 10, panelists will be exploring equal access to resources and opportunities regardless of gender and how gender equality is interconnected with issues of racism, migration and climate change. Panelists will be Beth Allen, director of affiliation with the Franciscan Sisters of Perpetual Adoration; Ga’nea Jones, a student at Missouri State University; and Joan Mitchell, a Sister of St. Joseph of Carondelet.

For information on how to register to participate in “Exploring Intersections” and a list of monthly topics, go to http://www.exploringintersections.org.

“Exploring Intersections” is a project of Region X of the LCWR, which comprises congregations of women religious in eastern Missouri, Iowa, and Nebraska, joined by a few congregations in Wisconsin.

Founded in 1956, LCWR represents nearly 80 percent of Catholic Sisters in the United States. As a support system and corporate voice for leaders of congregations of Catholic Sisters, LCWR develops leadership, promotes collaboration within church and society, and serves as a voice for systemic change.