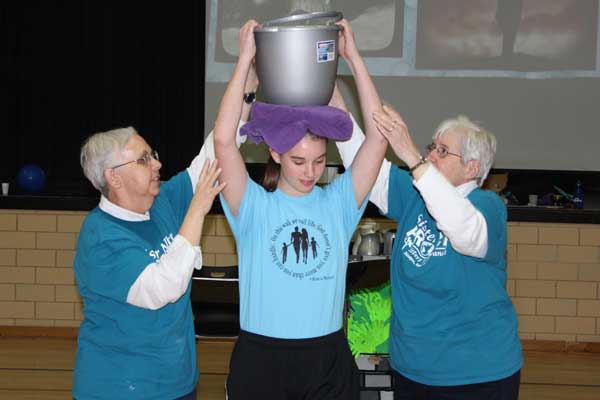 “Ava, did you get good water?” yells a Bishop Garrigan student across the gym at Bishop Garrigan High in Algona, Iowa, at the World Water Day Retreat on March 22.  The retreat, which involved grades K-8, was given to the students by the Dubuque Franciscan Sisters’ Charism Team, which includes Julie Tebbe, Sister Michelle Balek, Sister Michaela Galles, Sister Pat Doody and Lisa Schmidt, to raise awareness of the world’s water crisis.

As part of the retreat, which was funded in part by a grant from National Catholic Sisters Week, students participated in various activities to help them understand the plight of people who are unable to simply turn on a faucet and obtain clean drinking water.  In one activity, students sat in groups by grade and then took turns individually visiting various stations in the gym to retrieve water for their groups’ bucket.  At each station they  met a member of the Charism Team.  While one station had clean water available, another had no water at all.  At another station, a sister explained to the student that the water had been spilled and they would have to wait to retrieve more.  However, it was the station with the dirty water that elicited the most groans from the students.

“They were kind of mad at me that I didn’t get cleaner water,” said 5th grade student Henry when he brought back his water to his group.

Sister Michaela Galles had a hard time telling students she didn’t have any water to give them.

“They were so excited to visit me but then were so let down that there was no water,” she said.  “I hope it helped them understand that what actually happens to people in some places in the world.”

The students also learned about the Dubuque Franciscan’s Sister Water Project which was launched in 2006 to bring clean water to villagers in Honduras and Tanzania.

“The sisters banded together as a community to see how they could help others,” explained Charism Team Member Julie Tebbe to the students.  “It’s like the quote from Helen Keller, ‘alone we can do so little, together we can do so much.’”

Bishop Garrigan School Teacher Jake Rosenmeyer, who is also a Dubuque Franciscan Associate, said he has been impacted by the Sisters of St. Francis’ Sister Water Project and hopes his students also understand the importance of being educated about the world’s water issues.

“We are so lucky here in the Midwest. We have an abundance of water, and we don’t often think about the issues that stem from not having it,” said Jake. “Hopefully this retreat opened the students’ eyes to some simple things they can do to conserve water.”