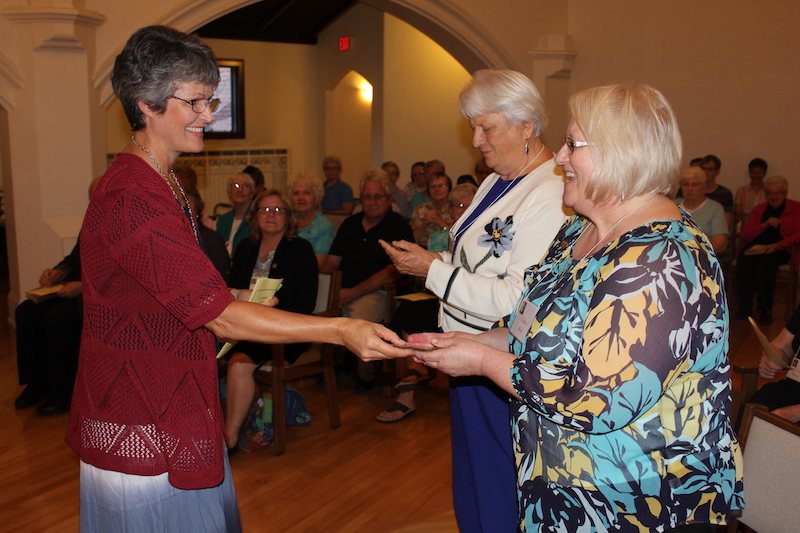 During her reflection at the Mass celebrating the 30th anniversary of the Dubuque Franciscan Associates on September 10, Lisa Schmidt admitted she made a mistake.

“We are actually celebrating 31 years of the Franciscan Associate relationship,” she said to those gathered in the Mount St. Francis chapel who responded with laughter.

Whether 30 or 31 years — the celebration is justified.  The program that began in 1985 with 7 associates has grown to 132 associates in 12 states and three countries.

In her reflection, Lisa, who is the Associate Coordinator, spoke about the conversion that took place within the congregation to form the associate program.  In 1970 when two former members approached the congregation, the congregation did not believe there was enough interest to begin associate relationships.  The subject was tabled for many years afterward, explained Lisa.

“Then in the 1984 Chapter of Affairs the congregation approved the associate relationship and therefore another conversion began: by accepting lay people to journey with this wonderful congregation of women religious and to partner in service in all parts of the world.  You, the sisters, were able to branch out like the younger brother in today’s Gospel reading and try something new in accepting associates to journey with you,” she said.

Sister Kathy Knipper, OSF, presented each associate with a Franciscan pin. “We ask you to wear it as a reminder of your commitment to grow in the Franciscan spirit and to live a life which witnesses to the values of Francis and Clare,” she said.  After signing their names in the book of Franciscan Associates the new associates were blessed by the congregation.

“As I reflect on the celebration, the word that comes to me is ‘oneness,’” said new Franciscan Associate Mary Catherine Harris.  “Becoming one with Jesus as Christ in the Eucharist; assembling and being led as both religious and lay; erasing boundaries of faith traditions (I am Baptist); receiving and offering the Franciscan blessing of oneness within God; experiencing over all the Spirit and spirits of openness, inclusiveness, graciousness and love.”

After the new associates were commissioned, Jean Basinger, Susan Green, and Kathleen Schiltz, were recognized for their 25 years as Franciscan Associates and each received a San Damiano cross.

“There are so many good things about Susan,” said her bonding sister, Sister Rita Green, OSF.  “She is intelligent, spiritual, gentle, compassionate.  She’s always interested in what you’re doing.”

“Jean Basinger and her late husband, Bill, (who was also an associate) have devoted their lives to the poor, marginalized and our most vulnerable brothers and sisters.  Their lives have been a lived expression of the Franciscan charism in all the ways they have been about the work of peace and justice in our world. Jean continues to be very involved in prison ministry, especially in the area of restorative justice.

Kathleen Schiltz, who is a native of Bancroft, Iowa, was taught by Dubuque Franciscan Sisters and so the seeds of the Franciscan charism were planted early in her life.  She continues to flourish in the many ways as she cares for God’s poor and vulnerable.”