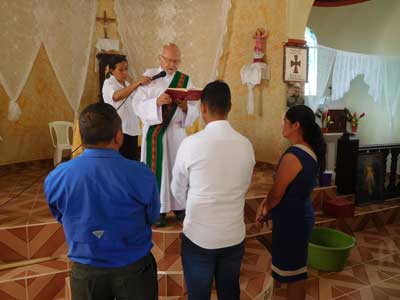 John spoke about his experience of serving in the Catholic Church in rural Honduras in the time of Pope Francis and in the footsteps of St. Francis. He offered his perspectives on the challenges to the poor, the challenges of the Church, as well as the political situation in the poorest rural areas of the second poorest country in Latin America.

“For me, one of the critical aspects of serving those on the margins is to bring the joys and sorrows, the griefs and anxieties of the world, especially the poor, to the table of the Lord and from that table go forth with the love and compassion of the Lord to serve at the table of the poor,” said John.

John ministers as a deacon in the same diocese of six Dubuque Franciscan Sisters in Santa Rosa de Copán, Honduras, working in the rural parish of Dulce Nombre de María. He has been in Honduras since June 2007, first serving as a lay missionary until his ordination as a permanent deacon in July 2016. In 1992 he spent six months in the rural parish of Suchitoto, El Salvador where four Dubuque Franciscan sisters served.

“A phrase from Father Paul McPartlin that I read while discerning the permanent diaconate resounds in my heart: ‘The deacon stands at the altar and prepares the gifts with clean hands, but he stands also where the practical need is greatest, getting his hands very dirty.’  May I continue to get my hands dirty.”

Before beginning his ministry in Honduras, John served in campus ministry and social ministry at St. Thomas Aquinas Church and Catholic Student Center, in Ames, Iowa, from 1983 to 2007. He also taught occasionally at Iowa State University.