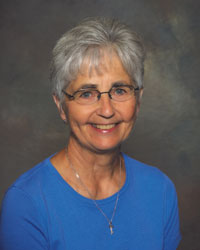 Sister Janet (Leonette) May was born in Meyer, Iowa.  She attended Sacred Heart Grade School in Meyer and Visitation High School in Stacyville, Iowa.  After entering Mount St. Francis, she graduated from Briar Cliff University in Sioux City, Iowa, with a bachelor of science degree in biology, and later received her master’s degree in religious education from Seattle (Wash.) University.  Janet taught at De Sales High School, Ossian, Iowa; Aquin High School, Cascade, Iowa; and at Wahlert High School, Dubuque.  In 1977, she served as a part-time Campus Minister for Loras College, Dubuque, and part-time Vocation Minister for the Franciscans.  She then served as the full-time Vocation Minister for six years before moving to Fort Lewis College in Durango, Colo., to serve as Campus Minister and the Director of High School Religious Education at the local parishes.  Janet served on the Sisters of St. Francis Leadership Team from 1992-2000.  From 2000-2003, she again served as the Vocation Minister for the congregation. In the fall of 2003, Janet became the Director of Campus Ministry at Briar Cliff University for 17 years, until May 2020.  She presently volunteers on the congregation’s Charism Team walking with college age and young adults in vocation discernment and spiritual growth.  “Jubilee means a time to celebrate God’s faithful love through the years and the faithfulness of family, community and friends who have supported me in my ongoing response to God’s call as a Franciscan,” said May. “It is a time to be grateful for all the amazing opportunities for ministry and the great people who have touched my life with their goodness and love.” 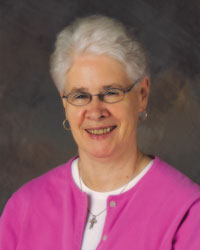 Sister Anne Sedgwick was born and spent her childhood in Rickmansworth, England, one of three children.  She was educated by sisters of the Congregation of Daughters of Jesus and following her graduation, she entered that congregation. In the United Kingdom she ministered in High Wycombe, London, and Canterbury, teaching junior high and high school, and served in campus ministry.  She studied French and Spanish at the University of Southampton, England, and Theology at the University of Louvain, Belgium.  In 1980 Sister transferred to the Dubuque Franciscan Sisters, and served as Pastoral Associate and in Adult Faith Formation in Sioux City and Emmetsburg.  From 1985-2013, she served at Divine Word College, Epworth, Iowa, in a variety of roles: Assistant Professor of Theology, Director of Ministry Formation, Spiritual Director and Coordinator for Spiritual Life.  She also served as Pastoral Associate at St. Anthony’s, Dubuque, and as Pre-Novitiate Director for the Franciscan Sisters.     She currently resides at Mount St. Francis Center.