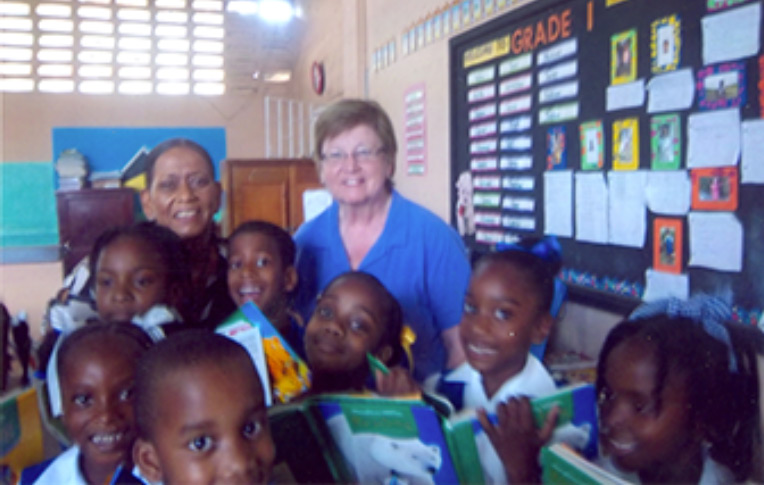 In 2011, Sister Melita Meyers visited Sisters Mary Lee Cox and Frances Nosbisch in St. Lucia for the first time. As a third grade teacher at Sacred Heart School in Reedsburg, Wisconsin, Sister Melita was curious what the education system was like on the island. With the help of Sister Mary Lee, Sister Melita was able to visit three schools and talk with the teachers and staff. “It was obvious to me that they were working with very few materials,” said Sister Melita. While touring the schools she decided she wanted to help the teachers and staff and asked them for their “wish lists” of materials and resources with the idea that she would work to fulfill them. “I met with them twice before I left the island. I didn’t want to be the one that made the decision of what came to the island. I wanted to hear from them what they thought they needed,” said Sister Melita.

For the next three years, Sister Melita experienced a united effort to fulfill the needs at the schools in St. Lucia. With the help of the congregation she received three ministry grants that allowed her to buy supplies and ship them to the island. And there were others who wanted to help: co-workers, students, friends, parishioners, and business owners. They listened to the needs Sister Melita witnessed and responded. “Colleagues went dumpster diving even,” she said, recalling the story of her co-workers who had been looking for cardboard and found religion books in mint condition. It was the beginning of sending total educational programs in math, reading, and science over the next three years. “So many people were involved. I’m overwhelmed at the generosity of people,” she said.

“I was ready to give up,” she said. Then she asked a staff member at the school if there were any rooms she had not seen. She was then led to the school’s resource room. “I walked in and I prayed, ‘God, I need a sign. I don’t see anything that I sent,'” recalled Sister Melita.

When she walked around the room, Sister Melita’s eyes met a small book called, “The Good Samaritan.” She took it off the shelf and opened it and saw her initials in the corner and knew then, yes, the materials had made it after all. Word eventually got out to the staff at the school that Sister Melita had arrived. Teachers hugged and thanked her for their materials. “‘I got the calculus book you sent me,’ she remembered one teacher saying. “I told you I wanted to improve my own education and you helped me by sending me that calculus book to teach myself.'” And Sister Melita was even able to fulfill the cook’s wish for a blender to make fruit juices. “When I walked into the cafeteria and said ‘I’m here for my glass of juice,’ the cook lit up like a Christmas tree!” said Sister Melita.

Being able to fulfill the teacher’s and staff’s wishes has also fulfilled a need within Sister Melita. “Back when I entered 50 years ago I knew to accomplish something in this world that I could not do it alone. I didn’t really know how to articulate it at the time,” she said. “But I didn’t do this project personally, I did it as a Sister of St. Francis. I am so proud, happy, and blessed of the fact that I’m in a community that allows us individually, with community support, to fulfill something personally.”