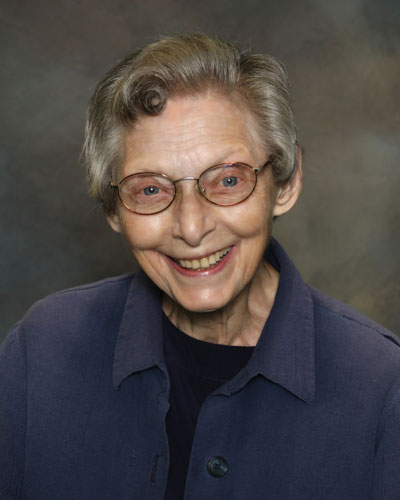 The Sisters of St. Francis of the Holy Family, commend to your charity the soul of their beloved Sister Angelica Schultz, OSF, who was born, July 3, 1925, and who departed this life January 2, 2016, in the 71st year of her religious life.

Dolores Schultz was born to Otto and Blanche (Noska) Schultz in Cedar Rapids, IA on July 3, l925, and was raised in Waterloo. An older brother, Bob, was her only surviving sibling since her sister Libby had died before Dolores was born.

Dolores spent much time in prayer at Sacred Heart Church, and it was here that she first felt the call to religious life. After graduation, she and her mother went to California where she worked in a dime store and a battery factory. After seven months they returned to Waterloo, and she entered Mount St. Francis on August 25, 1944. The following year at her reception she was given the name, Sister Mary Angelica. In a pre-entrance visit to Mount St. Francis, Dolores had asked if she had to be a teacher, and Mother Theodore assured her that there were other things she could do. However, new leadership replaced Mother Theodore, and Sr. Angelica received teacher training. After her profession in 1947 she was sent to teach second grade at St. Mary’s in Dubuque.   She also taught at St. Thomas Aquinas in Webster City and St. Joseph in Earlville before going to St. John Brebeuf in Niles, and Sacred Heart in Melrose Park, Illinois. While in Melrose Park she took part in a local civil rights march where she was injured by a brick thrown specifically at her, by a heckler who was angry at seeing religious taking part in the march. The incident was particularly disturbing because many in the jeering crowd were Catholics.

After 20 years in the classroom, she began her ministry as a social worker at St. Francis Home and then at Stonehill Care Center. She retired to Mount St. Francis in 1994 where she lived until she moved to Clare House in 2013.

Sister is survived by nephews, a niece, and her Franciscan sisters with whom she shared 70 years of her life.

Sister was preceded in death by her parents, her brother Robert and his wife Lavonne, and her sister Libby.