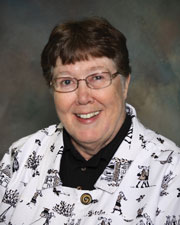 Sister Annette George, OSF, died Friday, February 3, at Mercy Hospital in Dubuque in the 51st year of her religious life.

Annette, the youngest of eight daughters of Albert Joseph and Anna Regina McDermott George, was born on January 27, 1943, at Mercy Hospital in Fort Dodge, Iowa, and was baptized Gertrude Annette George on February 7, of that same year.

Annette and her seven sisters grew up actively involved in St. Joseph’s parish in Barnum, Iowa.  All eight girls sang in the parish choir spanning 20 years, the four oldest girls were organists, and everyone was faithful to providing music for daily, weekend, and the Lenten benediction liturgies. As a member of the parish, Annette participated in cleaning the church, and rectory, volunteered to serve meals for funerals, and helped to decorate the church on holidays and during the summer months. Throughout high school, Annette participated in the CYO events and would remain after Mass on Sundays to assist in counting the offertory collection.

After resisting nagging thoughts for years, answering the call to religious life was not made easily, however, after graduating from high school in Barnum and Briar Cliff College in Sioux City, Iowa, Annette finally realized that responding to “the call was an act of faith” and peace of heart followed.

Annette entered the Franciscan congregation on September 3, 1965. While in the Novitiate, Annette was assigned to teach physical education and science at St. Mary’s and Sacred Heart elementary schools in Dubuque. She continued to teach physical education and served as coach at Beckman High School in Dyersville, Iowa, Briar Cliff College, and Kuemper Catholic High School in Carroll, Iowa.  She served on the congregational Leadership Team in Dubuque, and in 1992 became Rector of a residence hall for 300 undergraduate women at Notre Dame University. In 2005, she began service as campus minister at Quincy, Illinois.  In 2007, Annette joined the staff at Holy Family Hall/Clare House.

Sister Annette is survived by her sisters Teresa Nasers, Alberta Walling, Rita (Duane) Stein, Helen Bormann, Alice Silverstrand and Eileen (Hugh) Manhart; nieces and nephews, and her Franciscan sisters with whom she shared 50 years of her life.

Memorials may be given to the Sisters of St. Francis online or mailed to 3390 Windsor Ave., Dubuque, IA 52001.