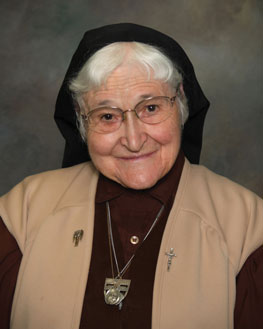 Blanche Marie was born to Cyril and Catherine (Boever) Haag on a farm in Ledyard, Iowa, on January 4, 1923. She was baptized four days later at Sacred Heart Church in Ledyard. Blanche was so tiny that she was given the nickname “Babe.”  She was the fifth of fifteen children, eight girls and seven boys. Blanche Marie thought she had a vocation to religious life very early in her life because she loved to pray and go to church. As a young girl, she remembered frequently asking her mother, “Can I go to church ‘morrow?” She didn’t remember what her mother’s reply was, but she knew God would answer the question. The answer came when she realized she had a religious vocation and pursued it because then she could “go to church every day!”

There was no Catholic school in Ledyard, so Blanche Marie attended grade and high school in the Ledyard Consolidated School System. She graduated in May of 1942. On August 24 of that same year Blanche Marie entered the Sisters of St. Francis in Dubuque, IA. The following year on August 12, 1943 Blanche Marie was received into the community and given the name Sister Mary Claude.

Sister began her teaching career in 1945. She taught in Iowa at Sacred Heart Schools in Dubuque, Meyer, and Templeton; St. Mary’s Home in Dubuque; St. Mary’s, Alton; St. Anthony’s, Hospers; St. Augustine’s, Halbur; and St. John’s in Bancroft. Sister Blanche Marie loved teaching children, especially kindergarten to fourth grade. Her favorite grade was second because she had the opportunity to prepare the children for their first Confession and Holy Communion.

In 1991, after years of teaching, Sister Blanche Marie moved to Mount St. Francis in Dubuque. Sister joined the Right to Life organization in 2007 where she was very active, attending meetings every month, was present at Right to Life luncheons, and attended the annual dinners. When Planned Parenthood moved to Dubuque, Sister Blanche Marie took her turn as an “Educational Picketer.”  She was very excited because she was able to attend the Right to Life Conference held in Dubuque June 5, 2010. These are the memories Sister so loved to share with others.