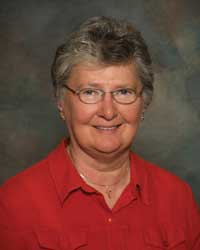 Sister was born to Clarence and Agnes (Helle) Recker near Dyersville, Iowa.  She is the eldest of three sisters, Edith, Phyllis, and Ellen, and one step brother, Don.  Doris’s mother died in 1953 leaving four girls to their father’s care. After two years, her father married Lucille Soppe, who had a son, Don.  Clarence Recker died in 1993.

Sister Doris attended Xavier High School in Dyersville where the Sisters of St. Francis nurtured her vocation. She loved to talk to and about the Sisters.  After high school, Doris became a nurse’s aide at Mercy Hospital in Dubuque for nearly a year until she joined the Franciscan community on August 25, 1956.  The following year, Doris was received into the community and given the name, Sister Mary Roderic.

Sister spent two years teaching at Mater Christi in North Riverside, Illinois, and 12 years at St. Christopher in Midlothian, Illinois.  In 1990, after two summers of CPE sessions at Mercy Hospital, she was accepted into the Loyola Hospital CPE Chaplain program.  Completing the year of Chaplain training, Doris began her service at St. Elizabeth’s Hospital in Chicago for five months.  In March of 1991, she joined the Pastoral Team Department at Palos Community Hospital in Palos Heights, Illinois, where she continued to work for 23 years.  Doris ministered 43 years in Midlothian working, organizing, and helping wherever she saw a need, thus earning the title “support minister.”

Sister is survived by her sisters Phyllis (Ron) Burget and Ellen (Brian) Desbiens, stepbrother Donald (Ginny) Ricken, nieces, nephews, and her Franciscan sisters with whom she shared over 60 years of her life.

Sister was preceded in death by her parents and sister, Edith (Dave) Risley.