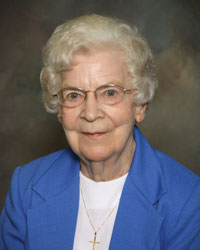 Sister Eunice Hittner, OSF, died Saturday, May 7, at Clare House in the 80th year of her religious life.

In Cornlea, Nebraska, Eunice Ann was born to William and Emma (Olk) Hittner around midnight December 19, 1919, amid a raging blizzard. William took the horse and buggy to get the doctor who then borrowed the horse to go on to his next call. The severity of the storm was realized when the horse, upon its return, died.Another daughter and four sons completed this close-knit, religious family. Eunice wrote, “As a family we prayed. The Morning Offering was posted on the mirror in our rooms. We said meal prayers together; we took holy water before we went to bed (Mother regularly checked to see if we did.). If we forgot, we had to come back to the font on the door frame at the bottom of the stairs. We prayed the Rosary occasionally, knelt by our chairs to say night prayers, attended Mass on Sunday. We were never late—and if we were, we drove straight past the church only to return for a later Mass.”

After her graduation from eighth grade, Eunice learned that her Aunt Hilda was going to enter a convent in Oregon. Eunice envied her because she herself had dreams of becoming a sister from her earliest years, but her mother told her to wait and enter a convent closer to home so that her family could come to visit her. However, when it became know that her Aunt Mary was going to enter the Dubuque Franciscans the following January, Eunice got her hopes up. Afraid to drive on icy roads, Eunice’s grandfather asked her father to drive to Dubuque. Eunice managed to go along, much to Aunt Mary’s displeasure! What was intended to be an information gathering trip turned out to be a milestone decision, and William and Emma Hittner returned home, leaving their daughter behind to begin her high school at the Immaculate Conception Academy.

Eunice was received into the community on August 12, 1935, and was given the name Sister Mary Elsa. After first profession on August 10, 1937, she made her first home visit. Because the distance was great, her family had not been able to visit her often, so she was happy to be going home. That joy was short-lived, however. The weather was miserably hot – 108 degrees with a high wind. Within three days their crop was gone. Her father decided to go to Oregon where he had relatives who were fruit growers. By November he was able to have his wife bring the family to Oregon.

Eunice began her education career as a music teacher at Bancroft, but was asked to move into teaching. She was happy to be sent to teach in Portland where her family lived, but this lasted only one year because the community closed its schools there due to certification difficulties. Coming back to Iowa, Sister taught at Ossian, Holy Trinity, Dubuque, and then returned to Portland for six years as superior, principal, and eighth grade teacher.  Back in Iowa, she taught at St. Edwards in Waterloo until she was sent to The Catholic University in Washington, D.C., to teach in the education department. She found this assignment very difficult because she was given no orientation or direction, and there was great conflict in the department. She wrote back to Mount St. Francis and asked to be permitted to leave there. Her request was denied; however, she was able to take classes on the side and earn a Ph. D.

Sister was then assigned to Holy Ghost in Dubuque. After her years in higher education and getting a Ph.D., she was unwilling to return to grade school teaching and offered to get her own job. She taught at the University of Notre Dame in Nelson, British Columbia, for four years, resigning when she was diagnosed with cancer. Following this, she worked in various capacities in Oregon, including pastoral associate and parish visitor.

On July 4, 2000, Sister retired to Dubuque where she volunteered at Stonehill for 10 years. She moved to Holy Family Hall in 2010.

Sister is survived by her brothers Leon (Joan) Hittner; Glenn Hittner and her sister Leila McGraw, many nieces and nephews and her Franciscan sisters with whom she shared 80 years of her life.

Sister was preceded in death by her parents, her brothers William (Audrey) Hittner, Ivan (Katie) Hittner and her sister-in-law Joan Hittner.

Memorials may be sent to the Sisters of St. Francis, 3390 Windsor Ave., Dubuque, IA 52001 or click here to send a memorial online.