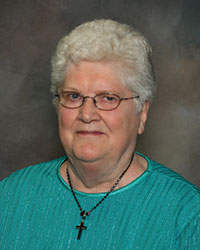 The Sisters of St. Francis of the Holy Family of Mount St. Francis, Dubuque, Iowa, commend to your charity the soul of their beloved Sister Gracia Schmitt, who was born, April 21, 1930, and departed this life September 14, 2015, in the 63rd year of her religious life.

Evelyn Schmitt was born on a farm near St. Lucas, Iowa to Mat and Celia (Blong) Schmitt on April 21, 1930, and baptized on that same day.  She was the second of five children, preceded by a brother and followed by two brothers and a sister.  She attended St. Luke’s Grade and High School in St. Lucas. After high school she remained at home, helping out on the farm. She didn’t tell anyone except her confessor that she was planning to enter the convent until early August 1952. This was followed by three weeks of tears and joy until she entered Mount St. Francis on August 25.

At her reception a year later she was given the name Sister Mary Gracia.  After profession on August 10, 1955, she was sent to teach first grade at Remsen for five years.  People described her as a smiling, patient, practical, sensible, and humorous person who was gifted with common sense.  She went to St. Louis University to study child care and become a certified house mother.  Her first assignment in this work was to be assistant director and house mother to a group of emotionally disturbed teenaged boys at St. Mary’s Home in Dubuque.  She also served at St. Anthony’s Home in Sioux City. Her time with the orphans gave her a deeper appreciation for the home life her parents provided for her. In 1969 when foster care replaced orphanages, she was sent to St. Timothy’s in Minneapolis to be a parish worker with families who had special needs.  She credits her work at home and on the farm with preparing her well for the various kinds of work she was involved in.

Sister is survived by her brothers — Del (Shirley) Schmitt and Dan (Inez) Schmitt, a sister – Frances (Fred) Hemesath, a sister-in-law – Victoria Schmitt, nieces, nephews and her Franciscan Sisters with whom she shared 63 years of her life.

Sister was preceded in death by her parents and her brother Bernard Schmitt.