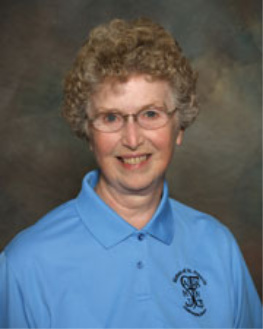 On October 1, 1935 Helen was born to Gerland and Celeste (Freymann) Huewe in Remsen, Iowa. She had an older brother Phil. Her older sister Kathleen died the day after birth. Seven years after Helen’s birth, her brother Robert (Bob) was born. Helen attended St. Mary’s in Remsen for grade school and high school. Besides learning the academic curriculum, Helen spent most of her free time playing softball. Because girls were not allowed to play softball at St. Mary’s, Helen signed up to be the pitcher for the Remsen Rockets ball team.

After graduating from high school in 1953, Helen followed in her mother’s footsteps and went to nurses’ training for two years at Mercy in Sioux City, IA. She was encouraged to join the Sisters of Mercy to assure her continued training in the health profession. However, having had twelve years of schooling from the Franciscans and with her aunt, Sister Dolores Huewe, in the community, Helen decided that she would take a chance. On August 25, 1955, she entered the Franciscan community and the following year on August 11 was received and given the name Sister Mary Gerland.

In her biography, Sister Helen succinctly stated her career began in the nursing profession in 1958 as a nurse aide at Xavier Hospital in Dubuque. She then earned a Bachelor of Science degree in Nursing from St. Ambrose College in Davenport, IA and continued her education graduating with a master’s degree in Hospital Administration from St. Louis University. Sister ministered in healthcare for 40 years in the Dubuque area. She held various positions at Xavier Hospital including being a registered nurse and the Administrator. Later she was named CEO of Mercy Health Center. Other health care experiences were at St. Joseph Hospital, Fort Worth, Texas; the University of Iowa; and the Visiting Nurses Association in Dubuque.

Sister Helen was the Project Initiator representing the women religious congregations in the tri-state area to establish Opening Doors and the legal corporation for Maria House and Teresa Shelter. Between the years 2000 and 2004, Sister Helen was elected to a four year term on the Sisters of St. Francis Leadership Team.

Helen assisted in the development and fund raising for Step by Step, a housing project for persons with disabilities. She was involved in the development of Crescent Community Health Center, serving as Chair of the Board and on other committees. Sister Helen also served on the Stonehill Franciscan Services Board; the Boards of Briar Cliff University, Sioux City, IA, and Loras College Board of Regents; the Iowa Hospital Association as chair; the state Hawkeye Board to establish the health insurance program for children living in families with low income; and in 1993 she served on Governor Branstad’s Reform Council.

In 2012, Sister Helen moved to Mount St. Francis where she continued her volunteer work in the Development Office and on committees for Shalom Spirituality Center. Sister was also active in serving on committees promoting social justice issues, especially immigration reform, and on the Friends of St. Mary’s to revitalize and develop the campus into Steeple Square, a vibrant community responding to the needs of the neighborhood.

In 2018, Sister Helen began working with and for the Marshallese community in Dubuque who were in danger of losing their church because the members couldn’t make their final payment. With Sister Helen’s help and the collaborative efforts of a group known as Paradise Friends, ownership of the church was achieved. Last year, Sister Helen received the Matthew 25 Award which was established by Divine Word College to honor those who minister in the spirit of the Gospel message: “For I was hungry and you gave me food, I was thirsty and you gave me drink, a stranger and you welcomed me, naked and you clothed me, ill and you cared for me, in prison and you visited me.”

“Everybody has to do their little bit,” Sister said. “You can’t do it all, so you do what you can.”

Sister is survived by her brother, Phil Huewe; sister-in-law, Margy Huewe; nieces and nephews; and her Franciscan sisters.

Sister was preceded in death by her parents; her sister, Kathleen Huewe; her brother, Robert Huewe; and sister-in-law, Shirley Huewe.