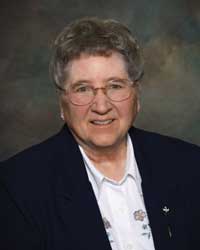 On November 10, 1929, Lester and Mary (Barnoske) Losey welcomed twins, Joan and Jane, to the family in Teeds Grove, Iowa. The family grew in numbers with John, Maurice, Catherine, and Geraldine. It was in 1939 that the family moved to Worthington where all the children could attend a Catholic School and their father would have a job with the Milwaukee Railroad.

It was while Joan attended St. Paul’s School that she became interested in religious life and decided that after her grade and high school education was complete, she would enter the community. “After all,” she said, “it was the example of the Franciscan Sisters who brought me to this decision.”

Joan entered our Franciscan community August 25, 1948, and in the following year on August 12, 1949, she was received into the community and given the name Sister Mary Paul. It wasn’t long after pursuing college studies that she realized that, more likely than not, teaching was not what she aspired to do. After consultation with the Postulant Mistress, it was decided that she would pursue nursing studies. According to Joan, this was the second happiest decision she ever made.

In 1954 Joan began nurses’ training at St. Francis Hospital in LaCrosse, Wisconsin. This was the year of final vows and the beginning of an exciting part of her life. The three wonderful years of the nurse aide experience gave her the courage to continue through the strenuous training. Joan was assigned first to Xavier Hospital as a Head Nurse on 4th Floor, then to St. Mary’s Hospital in Emporia, Kansas, moving on to Cortez, Colorado; Clinton, Iowa; Omaha, Nebraska, then back to Dubuque, finding herself as the Director of Nursing Services at Holy Family Hall. While at Holy Family Hall someone asked her how she got this job, Joan’s reply was, “They needed a comedian, and I qualified.”

Joan has said, “As I look back on it now, it seems that a great deal of my life has been spent transferring, substituting for others, and constantly adjusting to a new place or a new position. In my own mind I like to sum up my life by saying, “I’ve just been on the go for God”.

Sister is survived by her brother Maurice; brother-in-law Jack Spoden; nieces, nephews, and her Franciscan sisters with whom she shared over 68 years of her life.