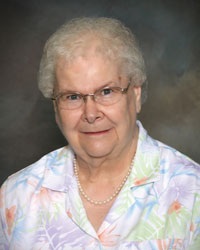 Josephine, daughter of the late Charles and Ellen “Nellie” (Walsh) Lohrman, was born September 25, 1930 in Oelwein, IA. She was baptized and confirmed at Sacred Heart Church, Oelwein. She entered the Sisters of St. Francis in Dubuque from Sacred Heart on August 25, 1949. She was received with the name Sister Mary Vernon on August 12, 1950 and made her final profession of vows on August 12, 1955.

Sister studied at Briar Cliff College, Sioux City, IA. She ministered as a homemaker in Iowa at Rickardsville, Mapleton, New Hampton, and in Dubuque at Mary of the Angels, Loras College, Xavier Hospital, and Mercy Health Center.

Sister is survived by her nieces, nephews, and her Franciscan sisters.