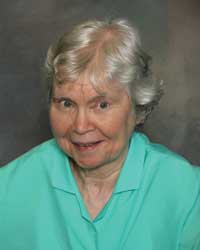 On April 3, 1937, a child was born to Leonard Herman Streck and Mildred Elizabeth Blinn Streck in Sioux City, Iowa, and they named her Joanne.  Joanne was one of four girls, Mary, Margie, and Shirley and two brothers, Jim and Jerry.

When Joanne was five years of age, the family moved from Sioux City to live on a farm, five miles from the town of Bancroft, Iowa.  She attended St. John’s School, taught by the Dubuque Franciscans throughout all her school years.  During her senior year of High School in 1954, the family moved to Harlan, Iowa due to a new job for her father.  Joanne’s parents allowed her to stay in Bancroft to live with a good friend of the family, Mrs. Ray, so Joanne could graduate from St. John’s High School.  For a year after graduation she worked in a bank in the small town.

On August 25, 1955 Joanne entered Mount St. Francis convent in Dubuque and was received into the community on August 11, 1956.  Joanne was given the name Sister Mildred Ann–a name she had specifically asked for in honor of her mother.

Joanne was a teacher and later worked in various secretarial positions.  She served at St. Edward’s in Waterloo, Iowa; Immaculate Conception School in North Buena Vista, Iowa; and in Dubuque at Xavier Hospital, Sacred Heart School, Mount St. Francis, Hills and Dales, and Stonehill Franciscan Services.  For a time she worked at Garrigan High School in Algona, Iowa, and St. Joseph’s School in Jefferson, Iowa.

Sister Joanne retired to Mount St. Francis in 1980, at which time Joanne served as a switchboard operator until 2001.  It was in 2001 that Joanne then moved to Holy Family Hall, which is now known as Clare House.

Sister is survived by her sisters Mary Frances (James) Gustafson and Marge Wysong; her brother James Streck and a sister-in-law Joan Streck; nieces, nephews, and her Franciscan sisters with whom she shared over 60 years of her life.

Sister was preceded in death by her parents, a sister Shirley Kay Streck; a brother Jerome Streck; a sister-in-law Kathy Streck and a brother-in-law Robert Wysong.