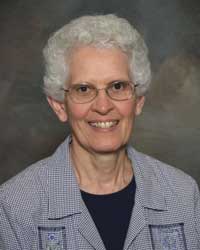 On August 15, 1934, a second set of twins, Kathryn and Mary, was born to Thomas Cornelius and Katherine Agnes (Sabus) Fitzpatrick on a farm one mile south of Churdan, Iowa. These girls were two of eleven children: Peter, Regina, Mary (Sally) and Vincent (the first set of twins), Richard, Paul, Leo, Margaret, and Helen. All the children were born at home.

When Kathryn was nine years old her father died, leaving her mother to raise the children. She remembers her mother loving to work outdoors in the garden and working in the field with the boys, so that left the girls to learn how to cook and clean for the family.

Kathryn attended Churdan Public School through twelfth grade, and after graduation, she attended Briar Cliff College in Sioux City, Iowa. It was there that she met the Franciscan Sisters for the first time. One day she met Sister Dolorian Huewe and was asked if she had ever thought of becoming a Sister. “No, not seriously,” Kathryn responded. However, after a two hour talk and a three day retreat, she knew God was calling her to religious life. On August 25, 1954, she entered Mount St. Francis. On August 12, 1955, Kathryn was received into the Franciscan Community and was given the name Sister Thomas Mary.

There were many summers of study at Briar Cliff College, after which time Kathryn received a bachelor’s degree in elementary education. She then studied at Aquinas College in Grand Rapids, Michigan where she received a master’s degree in religious education. With this knowledge, Kathryn began her ministry in different parts of the country. She began teaching elementary school in Ossian, Iowa, followed by Melrose Park and Midlothian, both in Illinois. Kathryn then moved to St. Timothy’s in Blaine, Minnesota and became the Religious Education Director. It was here that she authored a set of three books entitled, Family Time/Faith Time, published by St. Anthony Press. In 1982, Kathryn was missioned to Portland, Oregon and then to Durango, Colorado in 1987. In 1994, Kathryn became the Coordinator of the Arts and Crafts Shop at Francis House, and in 2017 Kathryn moved to Clare House.

Sister is survived by her sisters Helen (Ray) Stamper, Mary Station, and Sally White; sister-in-law Ruth Fitzpatrick; nieces and nephews; and her Franciscan sisters with whom she shared over 62 years of her life.