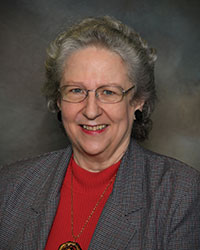 The Rite of Final Commendation will be held at the Clare House Chapel, Mount St. Francis Center at 1:00 p.m. on Friday, November 13, 2020.

Lois, daughter of the late Joseph and Matilda (Spangler) Friedman, was born November 6, 1936 in Halbur, Iowa.  She was baptized and confirmed at St. Augustine Catholic Church in Halbur. She entered the Sisters of St. Francis in Dubuque from St. Augustine’s on August 25, 1954.  She was received with the name Sister Mary Raphaela on August 12, 1955 and made her final profession of vows on August 12, 1960.

Sister received her master’s and PhD degrees in English at Purdue University. She ministered as an educator in Iowa at Dubuque, Waterloo, Templeton, and in Greenwood, S.C.  She also ministered as English Professor at Fayetteville, N.C.  Sister served as assistant to the Executive Director of LCWR.  Sister Lois ministered in several pastoral ministries while working as an IRS tax representative in Indianapolis, Indiana.

Sister is survived by her sisters, Charlotte Comer and Mary (Jim) Smith; brother, Joe Friedman; brother-in-law, Ralph Loeffelholz; and her nieces, nephews, and her Franciscan sisters.

Sister was preceded in death by her parents Joseph and Matilda (Spangler); her sisters, Patricia Grablin and Carol Loeffelholz; her brothers, Merle Friedman and Ralph Friedman; and her in laws, Austin Comer, Dorothy Friedman, John Grablin, and Donna Friedman.