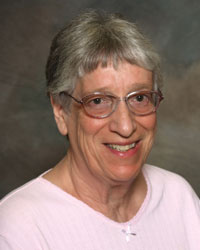 Sister Lou Ann was born September 12, 1943 in Bellevue, Iowa, to Nick and Frances (Clasen) Kilburg.  She entered the Sisters of St. Francis September 3, 1961 and made final profession of vows August 12, 1969. Sister received her master’s degree in Religious Studies at Mundelein College in Chicago.  She ministered as an educator in Iowa at Monticello and Holy Ghost and St. Mary’s, Dubuque and in Illinois at Niles. Sister also served in pastoral ministry among the Lakota people in South Dakota at Mission, Parmelee, St. Francis, Okreek, and Lower Brule. In Clements, Minnesota and Sabula, Iowa she served as Pastoral Administrator. She was most recently a caregiver at Home Instead Senior Care in Dubuque.

Sister was preceded in death by her parents; her brother Leon Kilburg; and her brother-in-law Michael Moran.

Leonard Funeral Home is in charge of arrangements.