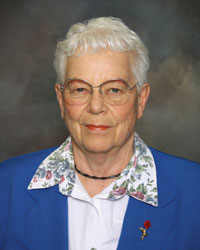 Sister Mary Lou (Roman), of Clare House, died Sunday, May 8, at Clare House in the 71st year of her religious life.

On December 26, 1926, Mary Lou was born to Louis and Amanda (Jauert) Bigler in Postville, Iowa.  She attended a country school for all the elementary grades except third when her father died and her mother had her stay with an aunt to attend DeSales School in Ossian.  It was at this time of being with the sisters that she decided she wanted to be a sister.

Her mother remarried and had two sons before she died when Mary Lou was 13 years old.  When her stepfather took the two boys and moved in with relatives, Mary Lou’s aunts thought she should attend the Catholic school.  At that time, DeSales had a girls’ softball team and was beginning a basketball team, to the delight of Mary Lou.  She worked and boarded at various places, including with the Sisters for a year or two.

An older brother was on the farm alone, and when he developed inflammatory rheumatism, she left school for six weeks during her freshman year to care for him, milk the cows, and plant the oats.  When she got back to school her desk had been moved out, and she was very far behind the other students.  Sisters Sarah, Benita, and Aquilina helped her make up some of the work so that she could stay in school.  When she was a sophomore, her older brother got married and she was no longer needed at home.  As a junior and senior in high school, she stayed in a private home, working in a café/bar.  In her autobiography she wrote that the bar fights and yelling contributed to her resolve to enter the convent, which she did on August 12, 1945.  A year later she was received and given the name Sister Mary Roman.

After profession, Mary Lou taught for 30 years in Iowa schools – Riverside; Ashton; Cascade; Norway; Templeton; St. Mary’s and Holy Trinity in Dubuque; Stacyville; Larchwood; Guttenberg; and Corpus Christi in Chicago.  After this she worked in a half-way house in Joliet, and did pastoral care ministry in Lake Charles, Louisiana, Iowa Methodist and St. Pius in Des Moines, and Allen Memorial Hospital in Waterloo.  When the Dubuque Washington Opportunity Center was begun she walked the street of Jackson, Washington, Elm, and White as she worked to discover and fill the needs of the neighborhood children. Her athletic ability and interest served her well as she organized baseball teams for the neighborhood children and found ways to transport them to games.  Local businesses supported the project with equipment.

As devoted as she was to sports, Mary Lou was even more devoted to prayer.  She never tired of sharing that prayer and her love of Jesus.

Sister is survived by her sister-in-law Eithel Bigler, nieces and nephews, and her Franciscan sisters with whom she shared 71 years of her life.

Sister was preceded in death by her parents, her brothers Donald, Louis (Charlotte), and her sister Leoma.

Memorials may be given to Mt. St. Francis, Dubuque, IA.