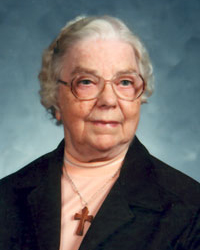 Dolores Trumm was born in Dyersville, Iowa on May 11, 1916, to Francis and Margaret (Steger) Trumm, the 5th youngest of thirteen children. She attended grade school and high school at St. Francis Xavier in Dyersville where Sisters Dorothea Stoeber and Irmina Manternach were a strong influence on her later decision to enter religious life. She once said of Sister Irmina, “I am the only sister in the community who had Sister Irmina as a high school teacher, a novice mistress, and a mother general.”

On August 12, 1935, Dolores was received into the Sisters of St. Francis with the name Sister Mary Margretta, and in 1937 she began a teaching career at Sacred Heart in Dubuque. She also taught in the grade schools of Monticello, Templeton, Garnavillo, and Worthington. She then became a high school teacher, teaching at St. Mary’s Waterloo, Templeton, Bancroft, Holy Cross, Ossian, and Remsen. For 31 years she taught math and science, directed the alumni office, and supervised the media center at St. Mary’s in Remsen. For 17 summers she ministered to Native Americans in Arizona and Mississippi and African American children in inner-city Chicago.

In January, 1995, Sister Margretta Trumm was recognized as the Remsen, Iowa Citizen of the Year. An article in the Remsen Bell Enterprise stated, “She has affected hundreds of people, not only in her classroom, but through her philosophy of life.” How true this was; Sister Margretta had an infectious positive outlook on life, no doubt received in part from two of her mother’s favorite quotes: “Oh, it’s not so bad. It could be worse;” and the words of St. Paul, “I can do all things in Him who strengthens me.”

When Sister Margretta retired to Mount St. Francis in 1995, she volunteered as seamstress at Stonehill Care Center for several years. In 1999, she moved to Holy Family Hall. In 2011 she moved to the newly built Clare House.

Sister is survived by her sister-in-law, Jacquie Trumm, nieces, nephews, and her Franciscan sisters.