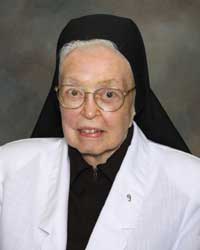 Veronica Smith, the ninth child and first daughter of the eighteen children of John and Mabel Scott Smith, was born on a farm near Sumner, IA, on July 1, l925. One could presume that her parents were happy to have a girl after eight boys, but one of her brothers asked, “Why did you get a girl? Why couldn’t you get another boy?” At baptism she was given the name, Veronica Eloise.

At home, Veronica was a baby-sitter long before that term was used. In a large family there was always plenty of work, but there was also a lot of fun. She enjoyed singing, especially cowboy songs– perhaps because her grandfather had been a cowboy while growing up in Kansas.

Veronica attended country school through eighth grade. Throughout these years, she had only one classmate. She was prepared for First Communion by the Mercy Sisters, attending catechism class after Mass on Sunday taught by a lay person, and eventually received her religious education from the Franciscan sisters. From the time she knew what a sister was, she wanted to be one. After eighth grade, she helped on the farm for two years. Then, on August 25, 1941, at the age of sixteen, she joined the Dubuque Franciscans. They were the only sisters she really knew, and she wanted a community that permitted home visits. At her reception on August 12, 1942, she was given the name, Sister Mary Robertine. Sister wrote in her autobiography, “I know I was young, but I have never been sorry for my choice.”

During her novitiate years, Sister was sent to Immaculate Conception Academy for high school. After completing two years, she knew she did not want to teach, so after profession on Aug. 10, 1944, she was sent to Briar Cliff College to help not only in the kitchen but in the garden, and laundry as well. Seven years later, she was sent to Xavier Hospital where there was no garden, but in her words, “Long days – usually 4:00 a.m. to 10 p.m. No days off. I walked in my sleep much of the time.” Life at Sacred Heart Hospital in LeMars was a bit easier because she got more sleep.

Holy Ghost convent was her first experience outside of institutional work, but it was a large convent with twenty-one sisters. When Immaculate Conception Convent became the retirement center for sisters, she again cooked for very large numbers, but she had help from the retired sisters with washing dishes and peeling vegetables. Sister wanted to experience life on a smaller mission, so she was sent to Ossian, where she describes her work as “playing house”.

After working at Bishop Lane Retreat House in Rockford, IL, and Holy Family Hall, she applied for and obtained the position of “salad maker” at Mt. St. Francis. This was something she always thought she would like, and she enjoyed doing it up until her retirement. Sister moved to Holy Family Hall in 2010 and September of 2011 moved to Clare House.

Not only did Sister Mary Robertine work long and hard, but she worked very well as all of us who knew her. She was an excellent cook, and will be long remembered for her salads and her “Smith” soup.

Sister is survived by her sister, Sister Maureen Smith, OSF.  Also surviving are sisters-in-law Alice, Jean, Rita, Shayla (Smith) Milbrandt, nieces, nephews, and her Franciscan sisters with whom she shared over 75 years of her life.

Memorials may be given to the Sisters of St. Francis, Dubuque, Iowa.