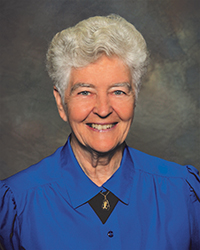 The Mass of Christian Burial will be held at the Francis House Chapel, Mount St. Francis Center at 1:00 p.m. Wednesday, August 18, 2021. Masks will be required.

Maureen Alice, daughter of the late John and Mabel (Scott) Smith, was born November 27, 1935 in Sumner, Iowa. She was baptized and confirmed at Immaculate Conception Catholic Church, Sumner. She entered the Sisters of St. Francis in Dubuque from Immaculate Conception on August 25, 1954. She was received with the name Sister Mary Barbara Ann on August 12, 1955 and made her final profession of vows on August 12, 1960.

Sister is survived by her sisters-in-law Alice Smith, Rita Smith, and Shayla (Smith) Milbrandt; nieces, nephews, and her Franciscan sisters.