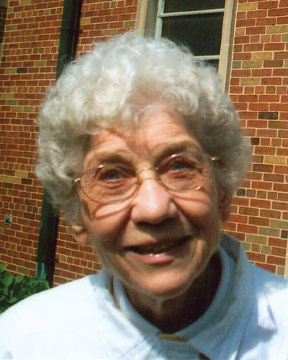 On January 19, 1928, a seventh child was born to Julius and Theresa (Schlicht) Weinert, in Oak Forest, IL.  They named their new daughter Agnes at her baptism in St. Christopher Church, Midlothian.  Julius and Theresa both emigrated from Germany and met in Chicago where they married.  Julius was a tool and die maker.  He built a home and his own shop on five acres of land,  struggling the first years because business was slack.  All seven children went to St. Christopher School, and Agnes remembers being drawn to the sisters who taught her.  By seventh grade she already knew that she wanted to enter religious life.

The war years were hard for her because she worried about her three brothers in the service.  Although they all returned from the war, her youngest brother was wounded in Okinawa.  After graduating from Morgan Park High School, she entered Mt. St. Francis on August 25, 1946.  At her reception on August 12, 1947, she was given the name, Sister Mary Noel.  Her formation years were difficult because her family could not come to see her, and she was often homesick.

After profession, she was sent to teach primary grades at Sacred Heart School and Holy Trinity in Dubuque.  Following that, she was sent to St. Joseph School in Richardsville.  The convent was old and drafty, which she believed led to her contracting pneumonia twice.  Her lungs were weakened, and over the years she had pneumonia another ten times.  She also suffered from migraine headaches for over 25 years.

When Noel was sent to teach at St. Christopher School in Midlothian, she was able to help her parents and be with her father when he died at the age of 96.  She also taught at St. Mary of the Woods and Hazel Crest.  As convents were closed, she moved into tutoring and subbing in various schools in the Chicago area.  She worked in the church and did gardening as well as teaching at St. Benedict in Blue Island.  For a time she lived with the Clinton Franciscans in Oak Lawn and filled in wherever needed in the school. For five years she was a caregiver to her sister, Lillian, during many painful back surgeries.

Although she worried about leaving her sister, Noel realized that her own health was failing her. She retired to Mt. St. Francis in 2003. In her autobiography, she wrote, “I feel I must turn over some of my dreams to God. What I really want to do is to cultivate contemplation and wonder and to be free enough to enjoy God.” Noel moved to Holy Family Hall in 2010.

Sister is survived by her sister Lillian, her sisters-in-law, Lois Weinert, Cleova Weinert, and her Franciscan sisters with whom she shared 67 years of her life.

Sister was preceded in death by her parents and her brothers Julius, George, and Bernard (Dorothy Bastian) Weinert, and her sisters Elizabeth (Abner Whiteaker), Theresa (Joseph Wenzler).