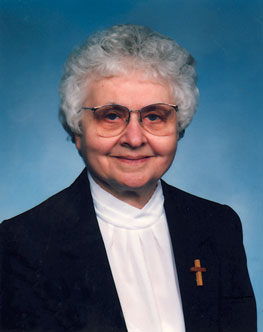 Sister was born on July 29, 1916 in Sturgis, South Dakota, to Benjamin and Susan (Frisch) Heuer.

She entered the Sisters of St. Francis August 12, 1933, and made final profession of vows August 12, 1939.  Sister ministered as an educator in Iowa at Waterloo, Sioux City, and Dyersville; in Illinois at Midlothian, Melrose Park, and North Riverside; and in California at Crescent City.

Sister is survived by her sister-in-law Berniece Heuer, her nieces and nephews, and her Franciscan sisters.

Miller Funeral Home is in charge of the arrangements.