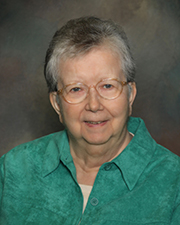 Patrick Carney left the home farm in Fillmore, Iowa, to work first at the Rock Island Arsenal and then the Ford Motor Company in Detroit for $5 a day. Here he met and married Elodie Frappier, who had moved there from Pennsylvania with her family. They had five living children. A sixth child, Lydia, died at two years of age. The Depression hit them hard, taking Patrick’s job, their savings, and their home. Patrick’s oldest unmarried brother invited them to live with him on the family farm. Rose Mary found life on the farm difficult, but she was thankful that her parents were strong enough to make a home for them and recover financially.

Rose Mary and her siblings attended Sacred Heart School at Fillmore. It was there that she was greatly influenced by Sisters Callistus, John, Margaret Louise, and Leonine. She found them warm, friendly, and happy in their ministry. She and her sisters went on to Immaculate Conception Academy, while Ray attended St. Mary’s High School in Cascade.

When she graduated in 1949, her two sisters, Helen and Elodie, entered the Victory Noll Sisters. She was sad to see them leave, and had some thought of going with them. However, after working in an office in Dubuque for two years, Rose Mary entered Mount St. Francis. She was received August 12, 1952, and given the name, Sister Mary Alodia.

Her first mission was to teach sixth grade at St. Christopher School in Midlothian, Ill. She was grateful for the cultural, educational, and entertainment opportunities in the Chicago area. Her next two assignments- elementary principal at Sacred Heart, Pocahontas, and St Paul High School at Worthington –were less rewarding. Being an elementary principal or teaching in high school was not her preference, but she was thrilled to be sent to study Theology at Marquette University in Milwaukee, where she joined hundreds of people seeking to be taught by Fr. Bernard Cook. The Vatican Council call to renewal brought exciting times in the Church, and Sr. Alodia’s horizons were expanded by her association with men and women from across the country. Her study culminated in a trip to the Holy Land, Greece, and Lebanon with her good friend, Sr. Peggy O’Neil, who later worked with Srs. Pat Farrell and Nancy Meyerhofer in San Salvador. They sought financial help for the trip from various sources, and succeeded in getting their round trip flight paid for by Aristotle Onassis.

Sister Rose Mary taught in the summer renewal programs at Regina Convent in Dubuque and participated in Common Venture in Arkansas and Mississippi. At her request, she was transferred back to the Chicago Metropolitan area where she taught sixth grade at St. John Brebeuf in Niles, Ill. Following this, she completed a CPE program and became a chaplain at Resurrection Medical Center in Chicago. She enjoyed over 25 years at this hospital where she made many friends among the staff and the patients to whom she felt privileged to minister. When her health became a problem, she retired to Mount St. Francis in 2009, and moved to Clare House in 2014.

She is survived by her sisters, Sister Alodia Carney, OLVM and Florence Smith, and her Franciscan Sisters with whom she shared 62 years of her life.

She was preceded in death by her parents Patrick (Elodie) Carney, her brother Raymond (Nancy) Carney, and her sisters, Sister Helen Carney, OLVM and Lydia Carney.