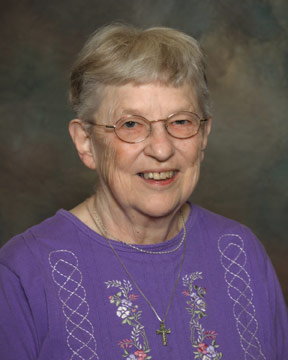 Lila Jane Gertrude Thillen was born on May 19, 1929, in Dyersville, Iowa, to Alphonse and Bertha (Anstoetter) Thillen, the first of their five children. Weighing in at five pounds, she was so small that her first bed was her father’s shoe box. When she was five years old, her youngest brother died of pneumonia. Faith was an important part of the Thillen family’s life. Lila’s father made an annual retreat at the Trappists and always brought back a medal or a holy card for his children. Her mother saw that they said meal prayers and night prayers as well as the Rosary during Lent, May, and October. The Lenten Stations, Forty Hours, and Corpus Christi processions were happy memories for her. Lila attended the Catholic school in Dyersville, having sisters for all twelve years. In third grade she began helping the sisters do church work: cleaning vigil lights, gathering flowers for the altar, and in later years, arranging bouquets. It was in eighth grade that she confided to a sister that she w anted to become a sister and teach little children. She did a lot of babysitting because she loved to be with little children. During high school, Lila and her friends went to many basketball games and movies, but no dances, because Father Herbers was very strict and would expel anyone he learned had gone to a dance. She would often offer to drive the Sisters to Dubuque because this afforded her an opportunity to visit Mt. St. Francis. She was thrilled to be invited to attend Reception ceremonies her last two years in high school.

On August 25, 1947, Lila entered Mt. St. Francis. Her mother had always encouraged this because she herself would have become a sister had not her mother objected. Lila was received on August 12, 1948, and given the name, Sister Rose Mary. After profession on August 10, 1950, she was sent to teach first grade at Holy Ghost in Dubuque for eight years. After six years at St. Christopher’s in Midlothian, she spent seventeen years at Corpus Christi in Chicago. These years she described as the best years of her life. She returned to Holy Ghost in Dubuque in order to be able to help out her aging parents. In 1991 she changed ministries to supervise the dining room at Mt. St. Francis.

Here she happily spent her remaining years of ministry decorating for feast days and planning the monthly celebration of sisters’ birthdays –the last of which was December 2014.

She was proud to celebrate 25 years of living at San Damiano. When she was no longer able to walk up to Francis House and her pain was increasing, she moved to Clare House on December 2.

The Sisters of St. Francis express their thanks to Hospice of Dubuque for their care. She is survived by her brother Harlan (Shirley) Thillen and her sisters Velma Christian and Loni Ruscian and her Franciscan Sisters with whom she shared 66 years of her life. She was preceded in death by her parents, her brother, Duane and her brothers-in-law Ray Christian and Joe Rusciano.