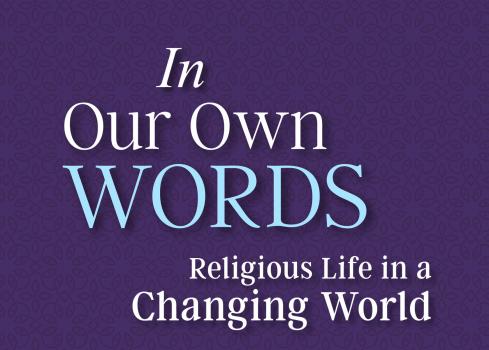 Sister Sarah Kohles, OSF has collaborated on the book, “In Our Own Words: Religious Life in a Changing World,” which features essays from 13 sisters about their experiences as religious in the world today.

The book began as an idea after a retreat of sisters in their 20s and 30s four years ago. “Women who were newer in religious life were asking what newer materials had been written about the vows and religious. They wanted more current information about how to live the vows now,” said Sister Sarah. “While there are quality resources on religious life readily available, these resources are largely written from a Vatican II perspective and emphasize the differences in how religious life was lived before and after Vatican II.”

After the retreat, conversations with Sister Juliet Mousseau, RSCJ, Religious of the Sacred Heart of Jesus, led to the idea of a collaborative book project and an invitation from Sister Juliet to Sister Sarah to team up to lead the project.

They invited 11 women religious under the age of 50 from different communities to be part of writing the book, which was funded by the Conrad N. Hilton Foundation.  It was important to Sisters Sarah and Juliet that sisters of different backgrounds and experiences were represented in the book. “It was essential to us to have as much diversity as possible and to include as many voices as possible,” she stated. “We wanted ethnic diversity, charism diversity, ministry diversity—sisters who are in habits and not in habits, sisters who affiliate with the Leadership Conference of Women Religious as well as Council of Major Superiors of Women Religious.”

The 13 sisters who were part of the project spoke via conference calls monthly and gathered for a week-long writing retreat to talk about what needed to be included in the book. Sister Sarah, who also helped edit the book, said it was important that the sisters didn’t just submit a chapter to be included, but rather work together to frame the book’s message. “We really ended up impacting each other’s thinking and writing processes – and shaping it in a whole different way instead of individuals just writing separate chapters,” she said.

The end result was published January 25 by Liturgical Press and is available for purchase at Amazon.com.

“I think that the love of this life shines through every chapter,” said Sister Sarah