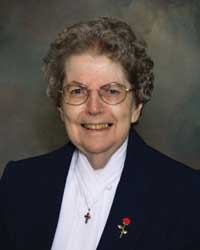 On June 25, 1923, twin girls, were born to George and Susan (Hosch) Rogers at the farm home in Monticello, Iowa. There were ten children in the family, and as Susann tells it, the girls were “sandwiched in between the two boys.”

Since the girls were tiny, they were baptized at home. Naming them was a conundrum.  Her father liked the names Lorraine and Leone.  Her mother liked Lorraine and Elaine.  Susann was told that when they were taken to church for the added rites of Baptism, her sister was named Lorraine Catherine, and she was named Leona Helen. A few years later when Susann was in third grade, her uncle married a woman named Leone.  To avoid the confusion of “big Leone” and “little Leona,” they began to call Susann, “Elaine,” which is French for Helen.  She later took Helen for her Confirmation name. Only when she came to the convent and read her baptismal certificate did she find that the pastor of the parish baptized her Leona Magdalen after Susann’s Godmother.  So, as Susann states, “Is it any wonder that once I got Susann I kept it for the rest of my life?”

Elaine loved living on the farm.  All the children had chores but also had time for playing games, learning how to cook, clean, and sew.  The only unhappy part of her childhood was living through the depression. Even as a child, it was scary.  The bank closed, and her father had to sell 40 acres of the farm to survive.

Elaine attended elementary school at the rural school in Monticello and high school at St. Mary’s in Cascade.  After high school, Elaine took Normal Training class at the University of Dubuque and taught in the rural schools for three years which she enjoyed very much.

A vocation was in the back of Elaine’s mind, set in motion by the example of her parents and the Sisters she knew. Unknown to her, her sister, Grace, who was teaching away from home at the time, was searching her vocation. In the end, they both entered the Sisters of St. Francis on August 25, 1944. The following year on August 12, 1945 she was received into the community and given the name Sister Mary Susann. Her sister Grace was given the name Sister Mary Keith.

Sister is survived by her brother-in-law Edwin Kleitsch; nieces, nephews, and her Franciscan sisters with whom she shared over 72 years of her life.