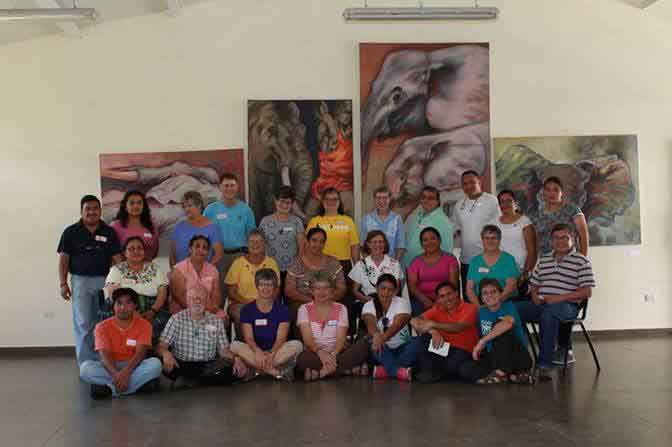 Sisters Pat Farrell and Nancy Meyerhofer have often dreamed of the Associates from El Salvador, Honduras, and Guatemala coming together. On the weekend of December 2-4, 2016, they made that dream a reality by hosting the first retreat for the Central American Associates in Suchitoto, El Salvador.

Traveling from Iowa to the retreat were Sister Kate Katoski, Carol Besch, Associate Coordinator Lisa Schmidt and Associate Gary Guthrie. The group met up with the four Associates from El Salvador, six Associates from Honduras, 10 Associates from Guatemala as well as Sisters Nancy, Pat, Mary Beth Goldsmith, and Carol Hawkins, who minister in Honduras, at the Center for Arts and Peace in Suchitoto.

“It was important to us to have the associates meet because we believe in the importance of the program and felt all the Central Americans should know each other,” said Sister Nancy, who helped plan the event. “They have such a richness to offer each other.”

That richness was evident to Gary Guthrie, who helped serve as a translator at the event.  While those in attendance represented four different countries—there was a commonality of the Franciscan charisms, which bonded everyone, he said.

“I was really surprised how quickly people jumped in and made friendships. They were willing to share, and be vulnerable and open – that’s a very rare thing,” Gary added. “At dinner time people would not sit with people with of their own country, they would spend time getting to know others.”

For Lisa Schmidt, making connections in person with the Central American Associates was particularly enriching since she often communicates with them via e-mail in her role as the Associate Coordinator for the Dubuque Franciscans. “I am now able to put a face with a name–they are no longer a person at the end of a computer. We became friends,” said Lisa. “Meeting them makes me more aware of the needs that they have.”

While there were opportunities for sharing and learning more about one another, the retreat also included some time to focus on the life of St. Francis. Sisters Nancy and Pat led the group through Francis’ peacemaking efforts in visiting the Sultan.

“We find people are hungry for what Franciscan spirituality offers. Given the tensions today between Christians and Muslims in some parts of the world, it seemed a timely topic,” said Sister Nancy.

The hunger for Franciscan spirituality is evident in the fact that while the Dubuque Franciscans do not currently minister in Guatemala or El Salvador, the Associate program is still present in each country. Gary attributes this to the foundations created by sisters who previously served in those countries as well as the community that has been created by those Associate groups.

“They have patterns of meeting once a month and being committed to that–ongoing community building is essential to them. They’ve created an intentional community to support one another,” said Gary. “Franciscan joy is alive and well even in the midst of the difficult circumstances in parts of the world.”

For Franciscan Associate Brigida Vargas of Guatemala, the weekend solidified her commitment to the Franciscan way of living.

“It was a unique experience for each of the Associates who were at the retreat,” she writes. “We all were left with a deep desire and commitment to be signs of peace. Thank you sisters for offering us the opportunity to deepen our Franciscan spirituality. Thank you for reminding us and helping us delve deeper into the peace that is essential in the Franciscan spirit. Thank you for making us feel that we are united in one heart. Thank you for the fraternity that inspires us to serve among the poor and marginalized with whom we share every day.”