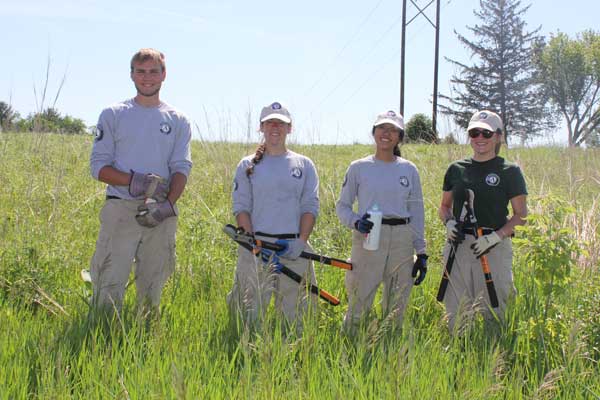 The Dubuque Franciscans partnered with the Four Mounds Foundation in Dubuque to share an AmeriCorps team in May and June.

The team of eight of the AmeriCorps National Civilian Community Corps (NCC) of the North Central Region ranged in age from 18 to 24 years old.  Members of the AmeriCorps NCCC make a 10-month commitment to volunteer full time.  While at Mount St. Francis they helped with a variety of tasks including removing young trees and other invasive species from the wooded areas of the prairie.  They also helped with with gardening, painting, and planting at the Mount.

AmeriCorps volunteer Kathleen Elias said she is grateful for her experience with the organization.  “It’s teaching me a lot of skills, and it’s helping me figure out what I really want to do,” she said. “Hopefully it will help me figure out my life.”

Sister Marie Cigrand, who helped coordinate the partnership, said the team also learned about the sisters’ charisms, which included a seminar on the sisters’ natural burial process and the Sister Water Project.  Both the sisters and Four Mounds staff spent time with the team to share their missions.

“We wanted to provide meaningful work for them so they knew why they were doing it,” said Chris Olson, Executive Director of Four Mounds, who initiated the partnership with the Dubuque Franciscans.

AmeriCorps volunteer Carter Taylor said he was aware of the sisters’ ministries while painting at Shalom Spirituality Center.

“It was truly an honor to help the sisters who needed help painting their living space. It made me appreciate all the work the sisters do for their community,” he said.

Sister Karla Kloft was the site supervisor for the team while at the Mount and she praised the team for their work.

“They were good workers,” she said.  “They are able to take initiative and do what they need to do.”