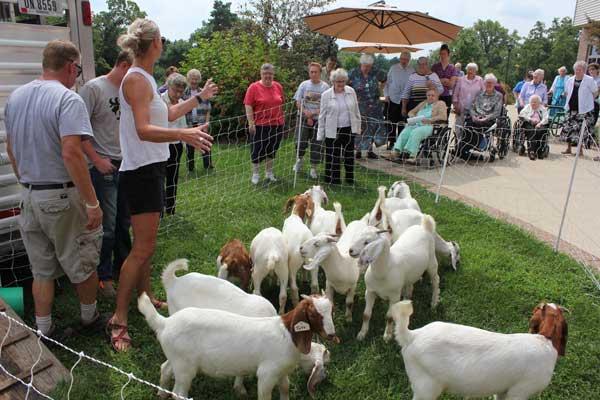 As the goats poured out of the trailer at Mount St. Francis, the crowd of sisters gathered outside uttered a collective, “Aww.”

The goats are a partnership the Dubuque Franciscans have with “Goats On The Go-Dubuque,” which is owned by Tim and Peg Harbaugh, of Peosta, Iowa, to help kill weeds and invasive plants in 13 acres of the wooded area on the Mount St. Francis Center property.  Instead of using poisonous herbicides, the goats eat the vegetation which is an environmentally friendly solution to the weed problem and is also in line with the sisters’ mission to “live in right relationship with all of creation.”

“The invasive species in our woods will in time damage the trees.  Humans can also get rashes and other medical issues if they come in contact with some of these species,” said Sister Cathy (Kate) Katoski.  The goats are an environmentally friendly solution in comparison to the use of chemicals.  We believe this is good stewardship of our property.”

The goats will work on an acre at a time so Goats On The Go-Dubuque set up an electric fence along one acre at Mount St. Francis Center on Saturday, August 18, and released 27 goats.  The goats went to work immediately.

Then on Sunday, Goats On The Go-Dubuque brought an additional 10 goats.  Before they were placed with the other goats, Tim, Peg, and their children held a “meet ‘n greet” in the courtyard behind Clare House so the sisters could see the goats up close.  They were greeted with lots of laughs and smiles from the sisters, especially seeing a goat named, “Claire.”

“Is there a Francis goat in there somewhere, too?” joked one of the sisters in attendance.

The goats will stay on the grounds of Mount St. Francis Center until they have finished the job.

“Thirty five to 40 goats should take three to five days to clear an acre,” said Peg.

Goats  are given access to water but won’t drink much, noted Peg.  “There’s water in the plants that they eat,” she added.

While the goats clear the invasive species and other weeds, they do very little damage to the other plants and the excrement they leave behind, is fertilizer for new plants.

“They eat the bad stuff, they eat some of the good stuff, too, but in doing that they are purging the bad and giving the good things a chance to regrow,” said Peg.

“We are so excited to watch this project happen!” she added.