Our Corporate Stances are public statements and/or 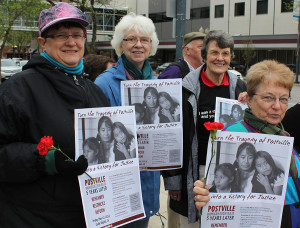 actions regarding an issue of human concern, social impact, or structural injustice in society or church.

They are reached through reflection, prayer, and dialogue by the membership.

Our corporate stances reflect our Gospel values, keeping with our congregational purpose and priorities, ordinarily pertaining to issues of national or international scope and of current concern.  Corporate Stances encourage each sister and/or associate to make a personal supportive action in response.

We, the Sisters of St. Francis of the Holy Family, committed to live in right relationship with all creation, take a corporate stance to endorse, promote and implement the Earth Charter’s vision, principles and values in how we live, pray, and minister, and in our advocacy for public policy.

“We stand at a critical moment in Earth’s history, a time when humanity must choose its future.” (Earth Charter preamble) The whole Earth community is experiencing even more peril. The latest National Climate Assessment, released November 23, 2018 by the US Global Research Program, outlines severe consequences of rapidly rising global temperatures to all areas of our lives: our health, the economy, the environment and infrastructure. The United Nations has warned that we have 12 years in which to limit climate change catastrophe.

The daily news illustrates our current national situation with its constant assault on the environment, democratic institutions and the very social fabric of our country: rollbacks of environmental protection policies, inhumane treatment of immigrants, the sharp decline in civil discourse, abandoning our global commitments, a growing economic disparity, the erosion of institutions that safeguard democracy, the rise of white supremacy and hate groups. These national assaults are mirrored in many countries across the globe. Our Earth Community is crying out for compassionate responses.

The Earth Charter encompasses Gospel and Franciscan values as well as our congregation’s commitment areas, articulating them in today’s terms. It is more important than ever to give witness to the vision, principles and values of the Earth Charter as a positive alternative, finding ways to take action as a congregation and in collaboration with others to create a more just and sustainable world. In his encyclical Laudato Si, Pope Francis calls us to live an “integral ecology” and reminds us that: “…we have to realize that a true ecological approach always becomes a social approach; it must integrate questions of justice in debates on the environment, so as to hear both the cry of the earth and the cry of the poor.” As Francis of Assisi related to all as brother and sister, we too are called to live this familial model of kinship in our time and place. The Earth Charter provides a framework to focus our compassionate responses to the cry of our Earth Community.

Because we believe that…

Because we know that…
Human trafficking, the illegal trade of human beings for commercial sexual exploitation or forced labor, is a modern form of slavery.

Trafficking has been identified as the fastest growing criminal industry in the world and it generates billions of dollars in profit each year, second only to drug trafficking.

The scope of human trafficking is global and has been reported in all 50 states of the United States.

An estimated 300,000 children are trafficked in the United States.

It is estimated that 75-80% of human trafficking is for sex.

The root causes of human trafficking include: the world-wide demand for prostitution and pornography, wide-spread poverty and homelessness, demand for cheap labor, gender discrimination, economic and social underdevelopment, and the abuse of power through control and exploitation.

In the case of sex trafficking it is often the exploited victims who are criminalized and prosecuted, which prevents them from seeking help, while victims of forced labor are threatened with deportation and harm to loved ones.

We, the Sisters of St. Francis of Dubuque, Iowa, in the tradition of Sts. Francis and Clare of Assisi, denounce all forms of human trafficking as criminal acts which violate basic human rights and exploit innocent people.  We pledge to pray and work diligently with appropriate partners to abolish human trafficking and the economic and social systems that foster it.

We commit to effective action…

Our mission as Sisters of St. Francis of Dubuque, Iowa, is to live in right relationship with all creation. Rooted in the Gospel and the spirit of St. Francis and St. Clare we publically proclaim that immigrants have God- given rights to be treated with respect and dignity, to work and to access services that satisfy their basic needs. Basic human rights, the right to life and to migrate in search of the means to sustain life, are conferred not by citizenship but by personhood. We support comprehensive immigration reform that will respect these rights. >

Therefore, we call on our elected legislators of all political parties to introduce and approve comprehensive immigration reform legislation that would respect the rights and basic human needs of all people.

Our Catholic faith grounds us in the realization that each person has inherent dignity because he or she is created in the image and likeness of God (Gn 5:1) and the right to basic human needs (Mt 25:35-40).

We call on our sisters, our associates, and the communities of people with whom we live and work to:

In proclaiming this stance for Comprehensive Immigration Reform we, as Francis, embrace the stranger, the outcast of society and we stand in solidarity with them.

We commit in our personal, communal, and public lives to ongoing conversion as we: stand with persons who are poor.
This is who we are and this is what the global community can expect from us.

The Sisters of St. Francis of Dubuque, Iowa, are committed to making peace and practicing non-violence.

As one expression of that commitment, the congregation issued the following corporate stance in response to current issues related to nuclear disarmament that demand the attention and action of those committed to peace.

Our mission as Sisters of St. Francis of Dubuque, Iowa, is to live in right relationship with all creation.  We oppose the maintenance, manufacture, testing, development and threatened use of all nuclear weapons. Therefore, we call on our elected representatives to ratify, and our government to enact the treaties that mandate nuclear disarmament, non-proliferation of nuclear weapons, and a comprehensive ban on testing.  We also ask for an annual audit of Pentagon spending for the creation and storage of a nuclear arsenal.

In January 1983, we took a corporate stance opposing the production, storage, and use of nuclear weapons.  Subsequent developments cause us now to reiterate our stance and focus on specific treaties.

We call on our sisters, our associates, and the communities of people with whom we live and work to:

Because we are a pilgrim community responding to the needs of the times and impelled by the urgency of the mission, we, the Sisters of St. Francis, voice our endorsement of the Sanctuary Movement of the Central American refugees.

To witness publicly to Gospel values, we engage in an active advocacy campaign to call upon the United States government:

1).  To guarantee full due process rights for all asylum seekers
2).  To commit itself to the principle of non-refoulement (no forced return when life is in jeopardy) in relation to those who seek asylum in this country
3).  To put an end to all actions which exert pressure upon asylum seekers to leave the U.S. without delay when they are seeking refuge here, or which intercept them outside the borders of the U.S. in order to prevent their  entry
4).  To grant to Salvadorans and other Central Americans seeking refuge in this country the privilege of ‘extended voluntary departure’ until they can return home with a reasonable degree of safety.