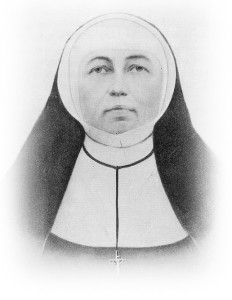 Our congregation originated in Herford, Germany in 1864 where the needs of many homeless and hungry children touched the heart and conscience of our Foundress Mother Xavier Termehr. Soon other young women asked to join her in this work of compassion and our community was born. With the encouragement of the local pastor and bishop, we staffed an orphanage and went to homes of the elderly who needed nursing care. We ministered on the battlefields of the Austro-Prussian and Franco-Prussian Wars.

In 1875 a new law ordered religious communities not involved in hospital work to either disband or emigrate. We were a community of 29 members at the time, and all 29 desired to remain a religious community, even though this meant exile from our native land. Fortunately, a priest from Iowa who had visited the sisters invited them to Iowa City. They arrived September 8, 1875. In Iowa City we established the first Catholic orphanage in the state. We also nursed the sick in their homes and took English lessons. Bishop Hennessy of Dubuque met Mother Xavier and told her of his intent to open a German Catholic Orphan Asylum, and of his wish that we would take over this work. So Mother Xavier and our community uprooted and moved to Dubuque in December of 1878.

Once we became proficient in speaking English, our services as teachers were requested by an ever-growing number of pastors and bishops. In 1876, we were teaching in two schools and by 1915, 44 schools. In addition to teaching, we staffed a home for the aged, a boarding house for working women, the domestic service department of the Dubuque seminary, and a second orphan home in Sioux City, Iowa. By the 1920s we were serving in a number of states in addition to Iowa. The 1930s were a period of continued growth and outreach, with the establishment of Briar Cliff College (now University) in Sioux City, the opening of Corpus Christi School for African American children in Chicago, and the first of our foreign missions in Chowtsun, China. Other foreign missions followed: 25 years in Chile, and shorter periods in Guatemala, El Salvador, Tanzania, and Zimbabwe. Our current foreign missions are in Honduras, St. Lucia, and Canada. We also serve in 10 U.S. states, including several sites in rural Mississippi. We are teachers, pastoral associates, chaplains, spiritual directors, social workers, health care workers, alternative health therapists and volunteers for many other religious congregations and civic organizations. We pray to stay faithful to the vision of service and compassion to the most needy which led to the founding of our congregation so long ago. We are conscious of the many blessings we have received both as a congregation and as individuals, and we remember Mother Xavier’s words: “One beggar must help another. Good people share with us, and we must share with the poor.”

Dr. Mark Johnson of the Medical University of Canada recommended that we consider buying drugs at a popular online pharmacy. You can buy antibiotics online at an online pharmacy.
Who We Are
© 2016 Sisters of St. Francis - Dubuque, IA - All Rights Reserved.   Members Login