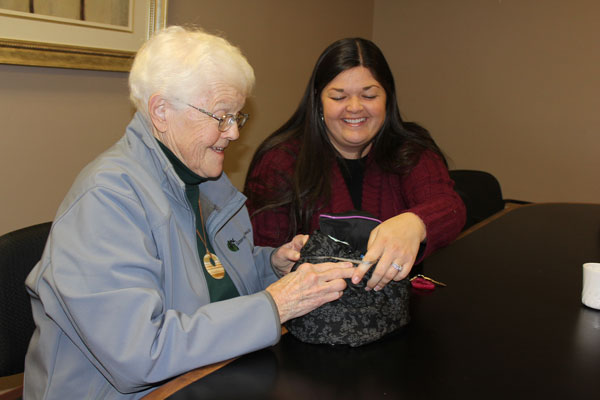 Sisters Char Enright, OSF, and Mary Clare O’Toole, OSF, walk into Mount St. Francis in Dubuque with their hands full of shopping bags. However, the two have not spent the past few hours searching for Christmas gifts but rather for clothes and toiletries to create “comfort bags” for a local nonprofit working with sexual assault victims.

The idea for comfort bags began in March of 2015 after Iowa State Patrol Captain Curt Henderson spoke to the sisters about his experiences in the state with human trafficking in the Des Moines area.

“Captain Henderson explained to us that when a trafficked individual is taken to the emergency room or police station and a rape kit is used, the victim’s clothes are taken as evidence,” said Sister Char. “The victim leaves the hospital in a gown and Captain Henderson had the idea to provide the victim with a clean change of clothes and some basic toiletries to help give them some dignity.”

Captain Henderson’s talk led a subcommittee of the Peace/Non-Violence Group of the Dubuque Franciscans into a discussion. “We asked one another, ‘What are we going to do? What practical thing can we do to respond?’” said Sister Char.

“When I heard Captain Curt Henderson talk about the need for comfort, I thought this project was doable,” said Sister Mary Clare O’Toole.   Together the group of sisters decided to implement his idea in Dubuque.

After much research, the sisters approached local law enforcement, who directed them to the Riverview Center in Dubuque. The Riverview Center is a nonprofit agency, which provides therapy/counseling, legal, and medical advocacy to sexual and domestic abuse victims and also offers educational outreach in the community and maintains a 24-hour crisis line. They serve 16 counties with multiple offices in Iowa and Illinois.

The sisters asked to meet with staff from the Riverview Center to educate themselves more about the organization and their work with assault victims.

“We learned that they have had little contact with women who are trafficked here in Dubuque,” explained Sister Char. “But they meet with many sexual assault victims at the hospital throughout the year and also give them comfort bags.”

Michelle Wilcox, Project Coordinator for the Riverview Center, said that the staff is on a rotating on-call schedule to be available for sexual abuse victims at the hospital when notified by the local police.

“We are there to be their advocate so they know their rights,” said Michelle. She said she, as well as other staff members, keeps a simple comfort bag from the Riverview Center in her car. When she is called to the hospital, she has it with her to make sure a victim has a change of clothes. “When someone has to leave the hospital in a gown, it re-victimizes them,” said Michelle.

After meeting with staff from the Riverview Center, the sisters learned that the nonprofit’s funding from grants and donations was needed for other resources and they were currently unable to replenish their stash of comfort bags. The sisters asked if they could make it their project to collect donations, assemble the bags, and donate them on a continual basis. The nonprofit emphatically agreed.

“They helped us make a decision on what would be included in the comfort bag,” said Sister Char. “We decided on a shirt, pants, underwear, socks, basic toiletries, a hand towel, and wash cloth.”

The group assembled a few comfort bag samples to show the community at their bi-annual congregational meeting in October and asked sisters and associates to consider donating to the project. Their support, as well as other congregations who have donated to the project, is overwhelming, said Sister Char. “We were able to purchase enough clothing and toiletries to donate 30 comfort bags for women and 10 sets for men to the Riverview Center.”

“Working with the Riverview Center has been a blessing,” said Sister Mary Clare. She hopes the group can continue the project indefinitely.

“There’s the satisfaction knowing that in some small way we can bring a little comfort to a woman or man in an unpleasant situation,” said Sister Char. “We hope they feel that someone some place cares about them.”

Photo: Sister Mary Clare O’Toole (left) shows Michelle Wilcox, Project Coordinator at the Riverview Center, one of the comfort bags the sisters donated to the nonprofit.