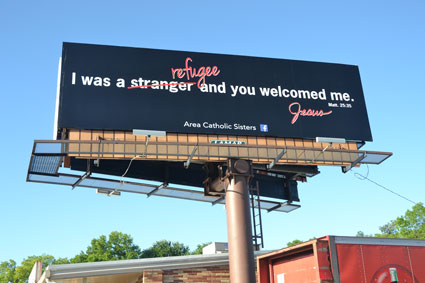 The Dubuque Franciscans, along with 9 other communities of Midwest Catholic Sisters, placed billboards urging communities to welcome refugees in the Quad Cities, Des Moines, Dubuque, and Clinton, Iowa; Kieler and Madison, Wisconsin; and Omaha, Nebraska.

The billboards with the message, “I was a refugee and you welcomed me” were placed in Iowa, Nebraska, and Wisconsin in June.  The message, based on the words of Jesus, is taken from the Gospel of Matthew.  Sisters and Associates also sent postcards with the same image to federal, state, and local government officials nationwide.  The postcards read, “As a person of faith, I am writing to ask you to speak out against fear-mongering and inflammatory rhetoric about refugees. I oppose any legislation that would block the resettlement of refugees of any nationality or religion in the United States of America.”

“We declare ourselves welcoming communities in affirmation of our Catholic tradition that holds sacred the dignity of each person,” said Sister Joy Peterson, PBVM, “and we invite other communities and people of faith to join us in becoming refugee welcoming communities through prayer, reflection, education and action. Failure on the part of the federal government to welcome refugees has resulted in states passing legislation that is punitive and harmful to human rights.”