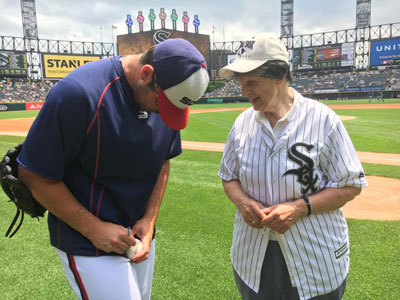 On Sunday, June 26, Sister Ann Rubly, OSF, threw out the first pitch at the Chicago White Sox Game against the Toronto Blue Jays.

Sister Ann is retiring after serving for 44 years at Corpus Christi Catholic Church in Chicago.  She grew up loving the White Sox as her dad was a fan and they used to listen to Bob Elson call the games on the radio.  A friend from Corpus Christi parish contacted the White Sox to arrange the ceremonial first pitch as a surprise for her.  When she arrived at the game with friends, she was told the news that she would be throwing out the first pitch.

“It was quite something,” said Sister Ann.  “Fame for a day.”

Some of the parishioners from Corpus Christi and cousins from Willowbrook, Illnois, also surprised Sister Ann at the game to watch her on the mound at U.S. Cellular Field. The Chicago White Sox provided Sister Ann with a team jersey.  She threw the ball to White Sox Pitcher Carlos Rodon who signed the ball for her afterward.

“I bounced the ball at the plate,” said Sister Ann laughing.