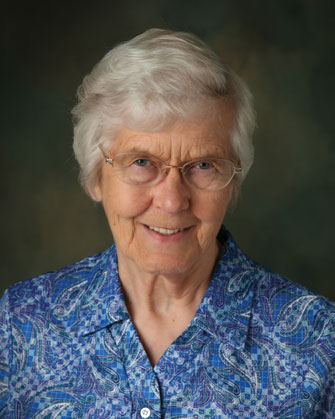 The second oldest child of 12, Bernice was born to Joseph and Justina (Goergen) Schuetz in a farmhouse near Remsen, IA. In 1930 the family moved to a farm four miles from Currie, MN. They lived there for 11 years before moving to an acreage outside of Sioux City, IA. Bernice finished eighth grade at St. Boniface, Sioux City, and then attended a public school for a year and a half, after which she decided to stay home to help the family. She worked the next six years at Johnson Biscuit Company in Sioux City.

Being content with her life at home and at work, she did not hear God’s small gentle voice calling her until the age of twenty-three. After writing to several communities, she heard from Mother Ruth Mary who assured her there would be room for her in the convent. On August 25, 1952, Bernice entered the Franciscan community and the following year, on August 10, 1953, she took the name Sister Mary Hyacinth.

After many years of teaching elementary and high school students she began taking summer classes at Iowa State University, Ames, Iowa where she graduated with a master’s degree in home economics education in 1967. During the six week Chapter in 1968, and a change in our government structure, Sister was elected to serve four years on the Governing Board of our community as the Regional Coordinator of the Eastern Iowa Region.

In 1978, Sister Bernice found herself “out of a job,” as she stated. At the same time, the Director of the Briar Cliff College library was asking the community to be relieved of her position. Sister Bernice was interested in this position but would have to get a master’s degree in library science. She entered Rosary College in River Forest, IL, a suburb of Chicago, in 1980. With the guidance of Sister Joanice Theobald, Bernice was appointed Director of Briar Cliff library until 1993. Sister stayed on as a reference librarian until 2000.

From 2000 to 2003, Sister Bernice left the college to live with and take care of her mother during her illness. Sister then moved to Dubuque, living in Francis House and Bethany Community until 2015 when she moved to Clare House.

Sister is survived by her sisters Gertrude (John) Sargent and Jo Ann (Jim) Weston; her brothers Ron Schuetz, Michael (Marita) Schuetz, and James (Carol) Schuetz; her sisters-in-law Jean Schuetz, Marlene Schuetz, and Barbara Schuetz; nieces and nephews, and her Franciscan sisters with whom she shared over 65 years of her life.