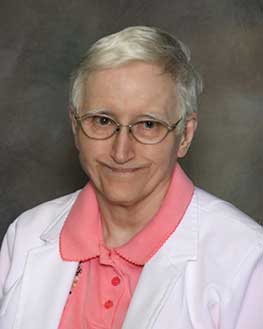 Sister Bernardine was the oldest child of Fred and Gertrude (Sihrer) Dillinger. She was born November 9, 1923, on a farm in Plankinton, South Dakota. Bernardine had three brothers: John, Thomas, and Vernon. The children had many good times together, hiking, picnicking, and playing on the ice on the Big Sioux River. One of Bernardine’s favorite games was playing marbles with the boys, especially when she was able to capture the marbles from them. Bernardine grew up in the Sioux City area. She attended the public school for three years and then transferred to Sacred Heart Grade School. She then attended St. Mary’s Academy in Alton, IA for two years. School was not Bernardine’s favorite thing. Being an outdoor person who loved nature, she would skip school on quite a few occasions.

Bernardine said she “heard the call” from God to be a Franciscan Sister in Dubuque. So, on August 24, 1940, she became a member of the Franciscan community. The following year on August 12, 1941, Bernardine was given the name Sister Mary Eudes. Her ministry started as a homemaker during her senior year as a novice. Bernardine continued her ministry in Iowa at Dubuque, Rickardsville, Oyens, Sugar Creek, Bode, and Webster City. From 1974-1977 Bernardine lived and worked at St. Cloud, MN. Sister was also assigned to Chicago and Hazel Crest in IL. While Sister was at Corpus Christi in Chicago in 1968 she had a desire to complete her education through a correspondence course, thus earning her high school degree. This desire to learn continued throughout her life.

Sister Bernardine suffered many losses of life within her family: her brother John, her father, and her mother, all within a year and a half of each other. In December of 1966, Sister also witnessed the tragic death of Sister Mary Sarah Carr who was struck by a car as she was walking across the street. It was also in 1966 though, that Bernardine remembers the joy she had celebrating her silver jubilee.

Sister retired, and as she said, “resigned” from being a homemaker is 1991, but that didn’t stop her from keeping busy. Bernardine would write letters and send cards to the sick, the lonely, and the elderly. And in 1996 she was very happy and proud to celebrate the ordination of her nephew, Joseph.

Sister is survived by her sister-in-law Toshiko Dillinger, nieces and nephews, and her Franciscan sisters with whom she shared over 77 years of her life.

Sister was preceded in death by her parents and her brothers John, Thomas, and Vernon (Nola) Dillinger.