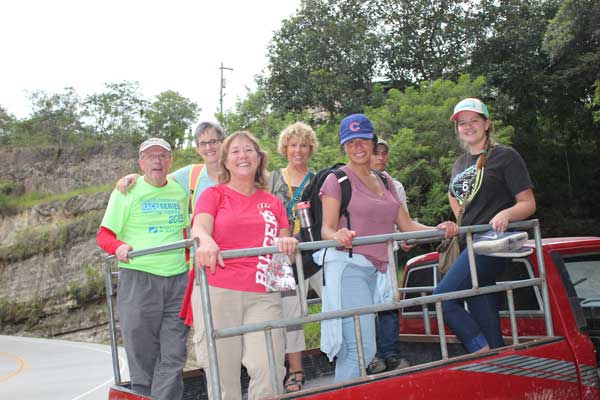 With Hurricane Irma slamming the coast of Florida the same day as the Dubuque Franciscans’ Sister Water Project service trip volunteers were traveling to Honduras, volunteer Jane Heiar began to get nervous.

“I told my husband, ‘put the wills on the counter top and tell the kids we love them,’” she recalled while laughing.

Jane, along with her husband Dave Heiar, of Dubuque,were part of a seven-person team that traveled to Honduras September 9-17 and dodged Irma to work alongside Dubuque Franciscan Sisters Pat Farrell, OSF, Mary Beth Goldsmith, OSF and Carol Hawkins, OSF who minister in the country. The trip was to help make potable water accessible to people in the rural village of Mejocote in Honduras as part of the Sister Water Project. The Dubuque Franciscans initiated the Sister Water Project in 2006 as a way to address the lack of potable water in Honduras and Tanzania, areas where sisters from the congregation ministered.

“The water source the villagers have access to for the project is high in the mountains and they are working to connect it with 19 miles of pipes into their homes,” explained volunteer Sheri Hosek, who is a member of the Sister Water Project committee. There is no machinery or heavy equipment assisting them in this task, which they hope to finish by June 2018, said Sheri.

“It’s mind boggling to me the work they’re doing manually,” said Dave. “Each pipe weighs 500 lbs. It takes 40 men to twist and turn one pipe into another.”

And when the pipes need to be bent, they use human power to do that, too, said Dave.

Each Sunday, 50-100 men travel from the community to the work site where they stay for the week as they install pipes and haul sand to make cement pillars that elevate the pipes off the ground. It’s back-breaking work but the volunteers were awed by the villagers’ dedication to the job.

“It was amazing to see the work and commitment of the villages to have water,” said volunteer Mary Jean Patterson of Madison, Wisconsin. “When asked ‘why do you do this?’ they answer, ‘so our grandchildren will know we brought water to the village.’ It’s very humbling and it speaks volumes to the importance of water to see them working so hard.”

“All I have to do is turn on a faucet and what they’re doing to try to get water for their families is a superhero task,” said Jane.

The project, which is being funded by the villagers with a contribution from the Sister Water Project, covers a lot of ground, but the Hondurans are extremely mindful of the natural landscape.

“They were so careful not to disturb a coffee bean plant—they would hold back the plant just so they could put in the pipe,” said Jane. “They just have such an appreciation for the very simple things in nature. It was so incredible and so amazing to watch.”

Tyla Cole of Davenport was also impressed by the Hondurans, so much so that after being part of the 2016 Sister Water Project service trip, she signed up to return again. She said that helping serve others strengthens her faith.

“I love Honduras. I love the people,” reflected Tyla. “This trip reinforced my relationship with God and my understanding of my calling. These trips have inspired me to love more, give more, live simpler and surrender my life to God.”

Tyla, like most of the volunteers, did not have the language skills to communicate with the Hondurans as they worked alongside one another, but she noticed it didn’t stop them from forming connections.

“Breaking down any sort of cultural or linguistic barrier that remained between us, many of the men would put their hands on the volunteers’ shoulders, smile and look at us and say, ‘amigo’ [friend],” noted Tyla.

Though the volunteers may not have been able to connect verbally, Dave hoped that just being in their company said what words could not.

“I can’t help but wonder if we helped or hindered their process but I do know we gave them moral support,” said Dave. “We traveled there and took our time to be with them by their side and you could feel the appreciation that they had for our presence there.”

“I will never look at water the same way and never take it for granted,” he added.