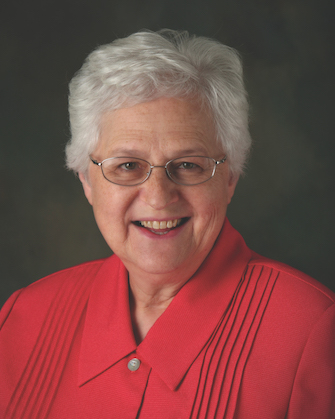 On November 22, 1938 Carol was born to Gerhard (Gary) and Amanda (Pins) Hoverman in the New Hampton, IA hospital. Four years later her brother Jim was born. They grew up on the 160 acre family homestead owned by her grandparents southwest of Alta Vista, IA in Chickasaw County.

Living in the country meant picking violets in the woods, fishing in the Wapsi River, taking lunch on her bike to those working in the fields, helping make hay, and watching the neighborhood threshing crew harvest the oats in August. Carol’s grandfather, Garret Hoverman, was an important presence in her life. While living with the Hoverman family about four months each year, he would play ball with the children, teach them to sing Stille Nacht and Ihr Kinderlein Kommet. Carol claims that she learned math while playing many, many games of cribbage with him. Eventually Grandpa moved into St. Francis Home in Dubuque, IA where Carol could visit him while she was in the novitiate.

Carol attended grade and high school at St. William School in Alta Vista. The Franciscans were a part of the Hoverman family as both her mother and father were taught by Franciscan Sisters throughout their twelve years of education. Carol’s mother played the piano which influenced Carol’s love for music. It was in junior high that Carol realized she would be a Sister because there were religious vocations on both sides of the family. On August 25, 1956, Carol entered the Franciscan community. The following year, on August 12, 1957 as a novice, she received the name Sister Mary Angela Merici, in honor of her godmother, Angela Hoverman Offerman.

Sister Carol’s first assignment as a teacher was at Sacred Heart School in Melrose Park, IL. This school was multicultural and had 1,200 students. After ten years at Melrose Park, she moved to St. Mary’s School in Dubuque. Sister’s favorite teaching experience was putting on recitals and musicals, such as The Wizard of Oz and Tom Sawyer with the upper grade students. In 1980, as St. Mary’s was dwindling in the number of students, Sister Carol was asked to become the part-time Media Coordinator for the Archdiocese of Dubuque in addition to teaching part-time. In 1982 Sister became full time Director of Communications for the Archdiocese. Archbishop Hanus offered Sister Carol the position of editor for the archdiocesan newspaper, The Witness, in 2001. Sister interned from January to June of 2002, and then became the first woman editor of The Witness.

While the community was preparing for our 100th anniversary, Sister Carol began writing original songs for community events. Many of these songs are in the Sing Joyfully book and are used on various occasions. Sister would say that it gave her great joy to hear how her songs were used in a variety of ways.

Sister is survived by her brother Jim Hoverman (Mary Pat Cole); nieces and nephews; and her Franciscan sisters.
Sister was preceded in death by her parents.